My most recent oil painting, Bride of Dreams, is a radical departure from the seascapes and shoreline landscapes which I've been creating over the last two or three years. While Bride of Dreams depicts a domestic interior, it also has a strong narrative quality and is laced with symbolism. I won't explain this symbolism to others; I'll leave each viewer to interpret it for themselves.

The bride was modelled by Rose Mairs, and the drawings for this came from a themed session for the Oxton life drawing group which I attend. Rose won the photography section of last year's Williamson Art Gallery's Open Exhibition. The cat, Bob, belongs to Janine Pinion, who won the painting section of the same exhibition. 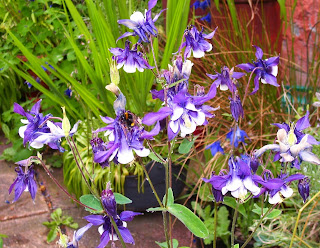 I enjoyed a lovely narrowboat cruise along the Shropshire Union Canal recently, on a day which turned out to be the hottest on record. Top speed seemed to be 3 mph, which made a refreshing change from the usual full-on-charge with which we tend to hurtle through life these-days.

It's good to slow it all down, gaze idly out of a window and watch wild swans paddle by. This is an activity I could really get into. I quite fancy the idea of a floating, travelling art studio. 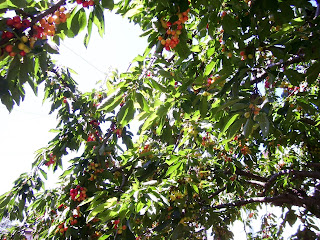 I've finally managed to squeeze in some gardening, and so the patio is no longer in danger of vanishing beneath an encroaching forest of in-the-wrong-place plants. If they had self-seeded in the border they'd have been fine as aquilegia are among my favourite flowers, and these deep purple and white ones (as in the photo) are gorgeous - but we also need to be able to walk over the patio!

The cherry crop is over now, so I pruned the tree back a bit. Now we can walk along the path without having to duck beneath branches laden with ripe fruit. The blackbirds have gorged themselves into an avian stupor. The squirrel family are looking distinctly portly, too.

Today I went to view the 9th Wirral Open Exhibition run by the Wirral Society of Arts and hosted by the Williamson Art Gallery and Museum. No sooner had I walked through the gallery door than my eyes leapt to a large painting of a ram's horned skull lit up from behind. By Jason Hurst, and called Illumined Aries, this painting's simple subject is vibrant with drama. Majestic work! No wonder that it had been selected as a prizewinner.

The other piece which really stood out to me was a well-planned symbolic painting, also a prizewinner, by John Afflick, called Humanitas. The frame has been inspired by the Italian Renaissance and there's more than a touch of Rossetti about the painting style, with its attention to detail, strong narrative quality and liberal inclusions of symbolism. I would very much like to view more work by this artist, who also had another intriguing painting in the exhibition.

I must stress, though, that my choices are entirely subjective and do not in any way mean that the other works in the exhibition weren't good too. These are just the works which stood out to me, and another person would most likely select differently.

Richard took his new camera for a trial run recently, and this is one of the images he took. It's of the long-abandoned ferry terminal not too far from the Pier Head in Liverpool, and I'm amazed it hasn't been demolished already.  Richard said he leaned over a fence to take this shot. I hope so!

Way back in 1992, I photographed Richard standing at the far end of this landing stage. It was more than a bit scary even then. He had his back to me, and was looking out across the Mersey. This happened during my first week working as a photographer at Conservation Practice, which is how Richard and I met.

Our job was to photograph listed buildings and monuments and disappearing sites around Liverpool, which is how we came to be trekking round the then semi-derelict docklands. Where once lay acres of abandoned warehouses, collapsing sheds and vast expanses of rubble now stand luxury apartments and glittering marinas. Gone are the aging ex-dockers with Alsatian dogs on chains outside their tiny wooden watchmen's huts, and instead it's all gated communities and apartment blocks with CCTV, with concierge staff togged out in quasi-military uniforms. And various bits of the city have been given fancy new names, such as the Baltic Quarter or the Ropewalks, which  used to be simply known as the grotty bits behind the shops.
Posted by Adele Cosgrove-Bray at 4:51 pm