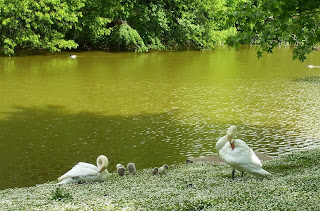 Regular visitors to Birkenhead Park, here in Wirral, have been thrilled with the successful hatching of five cygnets, which all seem to be healthy. Their proud parents are keeping a sharp watch over their silvery-grey brood, who seem to be growing by the day.

I also saw two newly-hatched coots, and a mallard who was chirping orders to her flock of tiny brown balls of fluff, seven or eight in number. I tried photographing them but they were too small and too far away for my geriatric Kodak. (Click on photos to see images larger).

I did some painting; nothing artistic, though, more a case of putting a coat of paint on the chunky edging stone with runs around the front of our house. I've used Wilko's Summer Rain, so it matches our front door. It looks a lot like chalk paint but is much more practical. Colour-wise it's hard to describe. Picture a chalky, very pale blue with a hint of green, but it's a muted too-grey-to-be-turquoise. Hmm, that probably doesn't help you much!

There is an exhibition of Wirral Metropolitan College's BA Fine Art degree graduates' work at the William Art Gallery, which runs until the 9th of this month. Charleigh Davidson exhibited some photos of people wearing papier-mache animal heads, which were engagingly quirky. Susan Leach's Womens' Lives was a shelf installation - literally a shop's clothing display shelf with T-shirts set out tidily upon it, but each garment's label referred to various equality issues. My personal favourites of the exhibition were Cheryl Bullough's woodland scenes, which had been created with black light reactive acrylic paint, and which were very evocative of a woodland at night.

Wednesday saw Richard and I in Chester, which is one of our favourite places. The summer crowds seemed conspicuous by their absence. Chester's normally packed-out with tourists at this time of the year, so much so that it can be shuffle-speed only along the main streets. Plenty of pavement space on Wednesday...

Anyway, we stumbled upon an exhibition of Bob Dylan's prints of his paintings in Castle Fine Art. Richard's a huge fan of Dylan's music and so he was very excited to find this exhibition. I'm not into his music, other than for his work with the Travelling Wilburys, but I did instantly take a liking to his bold use of colour and his loose, painterly approach which maintains strong linear and architectural qualities - roads heading off into the horizon, road-side cafes, roads lined with tall houses. I guess roads have featured heavily in his life while he's travelled from  place to place... Or maybe not; I know nothing about his life, other than for him having created a humongous body of music which is loved the world over.

In Baron Fine Art, I was able to view some original paintings by Edward Wesson and John Yardley, two artists whose work I admire deeply. The owner didn't mind us browsing at all, and happily talked about Wesson's and Yardley's work. There was plenty of other works to admire, also, of course, but I was grateful to be able to look at some of Wesson's actual works. He had a fabulously understated technique, obviously influenced by the tradition of Oriental ink landscape paintings. There's not an unnecessary line in his work, not a mark which doesn't play a direct part in the composition; and his paintings are full of light.

On Thursday, Richard and I went to the Lady Lever Art Gallery in Port Sunlight, in order to see the Rembrandt in Print exhibition, which brings together 50 of his etchings and printing experiments. The works were a lot smaller than I'd anticipated. Some prints were no bigger than a postage stamp, floating in  large frames displayed close together. This resulted in a room full of people cramming their noses to the glass, narrowly missing bumping skulls as they peered through magnifying glasses or muttered about needing new specs. (Okay, that last one was me).

Rembrandt's skill with drawing faces and facial expressions was extraordinary. With delicate lines and subtle cross-hatching he managed to capture character without resorting to caricature. Some of these works were done on Japanese paper, as he apparently liked how to ink reacted with that surface. It is an excellent exhibition which runs until September 15th, and if you're in the area I recommend that you take advantage of this opportunity to see some of his original works for yourself.

I have begun work on a new painting which is total change in direction from the coastal seascapes I've been doing over the last two or three years. The working title is Bride of Dreams.  I'm going to deliberately leave its interpretation to the viewer. I know what it means to me, but you're welcome to interpret it any way you wish.

The model for the bride was photographer Rose Mairs, who posed for the Oxton life drawing group earlier this year, wearing her mother's wedding dress. The cat is Bob, who regularly helps (?!) Wirral artist Janine Pinion in her studio.

I actually feel a bit nervous of painting this. I've started on the under-painting, looking to Edward Burne-Jones, Vincent Van Gogh and Susan Ryder for inspiration. I have no idea how it's going to turn out! Maybe it will be a complete disaster... I'm definitely pushing outside of my usual boundaries here.
Posted by Adele Cosgrove-Bray at 9:52 am