I've been studying the fabulous maritime paintings of Montague Dawson, not for his old-fashioned sailing ships but for his highly skilled methods of painting the ocean. He mostly painted in oils, whereas I find myself reaching for watercolours more and more, but when I spied a book filled with large colour plates of his work in my favourite labyrinthine bookshop in Southport, I couldn't resist buy it solely because of his depiction of waves. Getting water to look wet can be a challenge, I find - but then I always did like a challenge....

The study above was done in a small sketchpad without any manufacturer's brand name on it. It has a pale blue satin-like cover decorated with appliqued shells and beads, and its cream-toned paper has tiny gold flecks threaded through it - far too pretty to leave languishing in a scruffy basket crammed with unwanted treasures.

Speaking of treasures and pleasures, last month saw the 70th members' exhibition of the Wirral Society of Arts (WSA) hosted by the Williamson Art Gallery here in Oxton. I visited the exhibition twice as usual; first to get an impression, then second to really study the works which stand out to me. This is not to imply that my opinions and preferences are a measure of how "good" a work of art supposedly is, but is merely an expression of what I personally find interesting.

There was much to choose from! Three gallery rooms were hung with WSA work, one of these being an historical collection of older works which were not part of the main exhibition as such but which offered an engaging sense of context for the society as a whole. 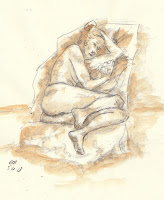 Work on the 5th Artisan-Sorcerer novel has been interesting. Rowan, who I'd originally intended to have a backseat role this time, keeps demanding centre-stage, which means the reader will learn more about his ambitions and his private reactions to what's going on around him. These are tough times, for the little community, with major changes unfolding. I've blogged previously about how I only loosely plot my novels, as I've found the plots tend to evolve as I write, well certainly has been the case so far with this book. Even the proposed title changed, as naming it Morgan felt wrong. You'll discover why when you eventually read the finished thing.

Richard and I had a week's simultaneous annual leave recently and we enjoyed our "staycation", as people are calling it these-days, making the most of the late summery weather as we picnicked on Red Rocks at Hoylake before walking round to West Kirby and through Ashton Park, up the steep steps to Mariners' Point and through Stapledon Woods. The dogs loved it, of course, though even they were worn out by the time we got home.

When Richard removed his socks in readiness for bed that night, he realised one ankle was badly swollen. It was back to normal by the following morning, but a couple of days later he found a large and ugly black and purple bruise between his ankle bone and heel. As he has diabetes type 2, we decided this needed an expert's eye so off he went to the nearest Walk-In Centre.

The nurse there said he may have fractured a small bone so an X-ray was needed but they didn't have the facilities to do this, so she sent him to another Walk-In Centre which did. This site, in Liscard, required more of a journey so he had to go after work the following day. Once he'd arrived at Liscard's Walk-In Centre and waited for nearly two hours, he was told they could not X-ray his ankle without a document from his doctor - which of course he did not have, as he had followed the advice given to him by the first Walk-In Centre!

So, the second Walk-In Centre phoned Richard's doctor and then informed Richard they'd made an appointment on his behalf in a half-hour's time. There was no way he could get there in that time, as due to a medical condition he's not allowed to drive. Another phone call re-scheduled the appointment, and so Richard then travelled to his own doctor's surgery - which is a four-minute walk from our house! - to get the correct document which he then needed to take to St Catherine's Hospital - which also is within reasonable walking distance from our house - in order to have the X-ray! And then he was told he'd have to wait about two weeks to receive the results.

Two weeks later, and he's walking without pain already. All bruising has vanished. And, it turned out that there was no fracture. Maybe he'd broken a vein, was the eventual verdict.

Do you like these four little wooden do-dads? Each has two tiny holes drilled at the top, so I can thread some embroidery silk through to make a loop, and then they could be hung on a wall. I photographed them with a ruler so their small size can be seen.
Posted by Adele Cosgrove-Bray at 10:10 am

Great website. Plenty of useful info here. I am sending it to a few pals ans additionally
sharing in delicious. And of course, thanks for
your effort!

Thanks, and you're welcome.