Ghosts and Things Which go Bump in the Kitchen

I do like a good, old-fashioned ghost story, with a solid plot and a strong atmosphere, and this week I've enjoyed two.

The first was Pay the Ghost, a film starring Nicolas Cage, Sarah Wayne Callies and child actor Jack Fulton, who already has an impressive filmography despite his tender age. A quick scan of online reviews show this film earned lukewarm responses at best, but both Richard and I really enjoyed it - which only demonstrates, once again, how totally subjective reviews are anyway.

With Pay the Ghost you get the story of a father doggedly searching for his missing child. His research takes him into the realms of folklore and fictional magic.

My other ghostly encounter this week came in the form of Cass Green's novel, In A Cottage In A Wood. A tale set in a remote Cornish cottage in dense woodland, and a London party girl spooked by strange happenings - sure ingredients for an entertaining page-turner. I liked the way Neve, the main character, was believably imperfect yet determined not to give in and run screaming back to the city.

Last night, Richard and I watched a DVD of Aerosmith performing at Donnington in 2014. Wonderful stuff! Getting on in years, yes, as are those of us who can remember them from before they hit mega stardom in this country, but their performance still sparkled with vitality and sheer professionalism.

I have been enjoying three books by Ron Ranson, an artist in his own right, who explores the watercolour paintings of Edward Seago, Edward Wesson and John Yardley in these books. Each influenced the other, while developing their own distinct style. Ranson was then influenced by them in turn, and now here I am, attempting to stand on the shoulders of giants yet without mimicry, and hopefully without falling flat on my face.

Are my paintings any good? I have absolutely no idea. All I can tell you is that I love painting, and a theme of big skies and water is a recurrent one in my work - no surprise, considering that the Wirral peninsula where I live is surrounded by water on three sides.

Which is not to say that I haven't been working on the 1st draft of the 5th Artisan-Sorcerer novel! I certainly have, and in fact chapter 10 was finished this week. I'd made loose notes on how this chapter was to go, but then Rowan threw me a curve ball and decided to do something entirely unexpected. It's such fun when characters do this, as if they've a life of their own somehow.

Actually, Rowan always one of the easiest characters to write. When I wrote his novel, the plot didn't require planning; it just flowed, rather like taking silent dictation. I know that sounds a bit odd, but that's how it was. With the 5th novel, which is very much a continuation of Bethany Rose's story, things are taking a bit more time as I have specific things which I want to communicate.


So, there we were, him glued to a Dr Who book, me browsing the book on Edward Wesson, when we were disturbed by a loud crash from the kitchen, followed by a brief odd rumbling sound. Brave soul that he is, I went off to investigate.

Our house is a long, narrow design, so to get from the lounge I have to go down the hall, past my office, through the dining room and then into the kitchen. I arrived to find the dog's dinner bowl dragged into the middle of the floor and tipped on its side. The net umbrella which keeps flies off food, which had been protecting six cooling-off chicken legs, was now on the floor and shredded - not completely, but certainly enough to earn it a place in the bin. There were now only five chicken legs. A plant in the window had been knocked over, and the window pushed further open. And strolling off over the roof of our shed was next-door's cat, proudly clutching his treasure in his dainty little mouth. And here he is:- 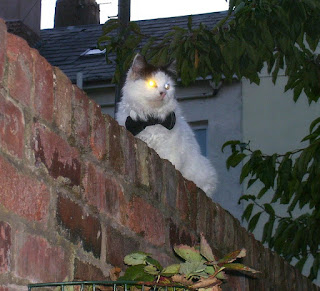 Posted by Adele Cosgrove-Bray at 8:16 pm