Trips Down Lanes and Exhibitions. 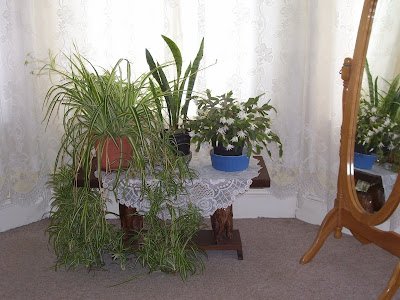 How's this for a spider plant? It had only five or six baby leaves when I brought it home. It's grown a bit since then.

My so-called Easter cactus flowered in June, which is not exactly Easter. It's not exactly a cactus either, seeming more of a succulent in character; and despite a prevailing belief that it is difficult to get these plants to flower again, it really isn't just so long as you don't change their position around or water them to death. Well-drained soil, feeds few and far between, sunlight and, quite simply, leave it alone, and it'll flower every year without fail. This year's flowers were the most abundant for three years. Three years ago we moved house. Remember the bit about not altering this plant's position.

My series of rapid sketches done in Birkenhead Park is now in its third year. They're done as I'm walking my dogs, hence the small size of the pads chosen so they fit in a pocket. They're all done at speed - sometimes no more than a few minutes, as wildlife and people will keep moving around! Consequently, some of the drawings turn out more like caricatures, but who said art can't be fun?

If you use the 'Art' tab in the menu above, you'll be able to watch video slideshows of the two previous years park sketches.

﻿﻿
I've been a bit slow to turn these sketches into paintings, which is the plan. However, as I was walking through the park I nearly stumbled over a stick, which was richly dappled with lovely lichens. And so we now have the fourth painting in this series..! A still life, obviously; an oil painting. There's the juxtaposition of the natural environment  - if a man-made landscape can be described as being natural - having been carried into the built environment. There are the subtle curves of the broken, rotting branch against the sharp lines of the clean table and window, and the gentle colours of the living lichens as opposed to the harsher synthetic table cloth. And there's the quiet humour of me having painted just one bit of a branch when there's a whole host of whopping great trees to paint. Well, it amuses me, at least.

Here's the life drawing which I did on Saturday, which took around 1.5 hours. The model is Brenda, who has posed for our group several times before. The A2-sized drawing's not quite finished but I'll work on it during the coming week. I used a rather lovely 8B pencil manufactured by Rexel Cumberland, called Derwent Sketching: Dark Wash. I really should have bought more than just one of these - but I'd been hunting for 10B pencils, which is what I've always used, but no-one seems to make them anymore. (If you know differently, please tell me!)

Every two years, the John Moore's Exhibition rolls around. And this year, once again, I meandered round the splendid Walker Art Gallery on William Brown Street, Liverpool, to view the latest batch of creative offerings. It is always interesting to see what other artists have been working on, even when the genre isn't to my own tastes.

Visiting this exhibition never fails to remind me of my art school days, long ago, when the tutors would troupe us from our dilapidated painting studios to the hushed and lofty rooms of the Walker, and there, segued between Pre-Raphaelites and Renaissance and morbid medieval religious paintings would hang the John Moore's Exhibition. The gallery café always did do a good cup of tea.

I'll probably be inundated with a zillion grumpy emails now, eager to tell me that if only I understood what I term the Blob & Squiggle School of Art then I'd like it more. Well, I understand Brussels sprouts but I still don't like them.

Speaking of trips down memory lane, I was rummaging through some ancient data discs and came across my old RPG stories. I was closely involved in a few online RPGs, and what good fun we participants had.

This was back in the halcyon days when the internet felt much more autonomous, before social networking's stranglehold. Back then, people used the internet as a creative playground. Videos of cats behaving like cats were rare. No-one cared what you'd eaten for dinner - unless you were pretending to be one of Anne Rice's vampires, in which case a dedicated audience would clamour for details.

Posted by Adele Cosgrove-Bray at 8:42 am