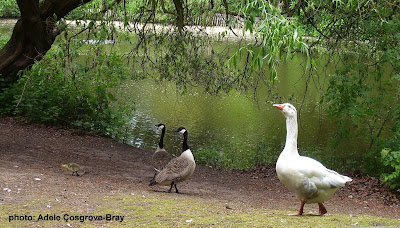 Is there anyone who fails to smile when watching newly hatched chicks? They're so fragile, so tiny, yet bravely scoot across dark lakes swarming with huge fish, or waddle determinedly after their parents through long grasses threaded with fox runs and rat holes. Or, like the little gosling in the photo above, amble contentedly on the mossy bank in full view of a murderous heron.
The two parent geese were keeping a sharp eye out, helped by a large white goose which seemed to be behaving like a visiting aunt who, not entirely approving of the parents' skills, did her best to shepherd the two little goslings closer to safety. (You can only see one gosling in this photo, and the parent birds were quacking at the other youngster which had wandered too far. Aunt Goose was having none of it, and was photographed mid-march in readiness to gently usher it closer once more). 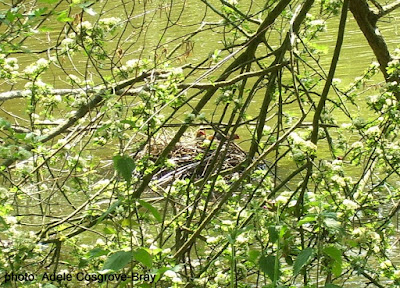 If you peer through the tangled branches in the photo above, you can see a nest filled with ginger-headed coot chicks waiting for their parents, who were very close by and making frequent trips to and from their brood with beaks full of food. One of the chicks was scrambling out of the nest ready to paddle off by itself. While I watched, several of the chicks did this and the parent birds kept nudging them back into the relative safety of the nest which had been built on top of some low lying branches on the water level. 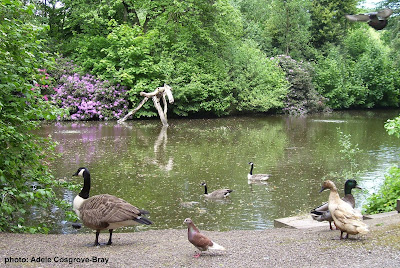 The fallen tree overhanging the lake is the regular sunbathing spot for three terrapins which have been living free in the park for at least two years that I know of. If you view this photo at an enlarged size you can see two of them on the branch next to the purple flowers, at the water's edge. There's also a heron which likes to use this tree to hunt from, and the tree usually has a few snoozing ducks dotted along it.﻿ 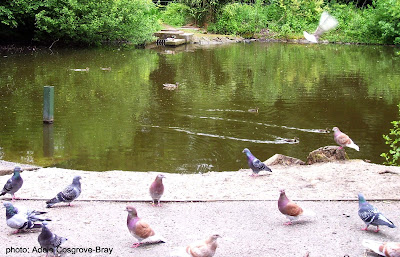 Pigeons are everywhere in Birkenhead Park. Pale ones, dark ones, ginger ones... They're all well fed and are so used to people that the second anyone stands still and reaches for a bag which might  contain bread or birdseed there'll be a flurry of wings heading their way. The birds seem to favour particular trees to roost in, but will also snuggle down on to daisy-carpeted banks. In this photo, you can also see some mallard chicks, probably about two weeks old, swimming with a parent duck.
I wonder if pigeons ever watch the ducks and geese gliding by on the water and think,  "I wish I could do that...?"

Posted by Adele Cosgrove-Bray at 11:41 am

My spouse and I stumbled over here different page and thought I
should check things out. I like what I see so now i am following you.
Look forward to exploring your web page repeatedly.

Thank you for dropping by my site; I'm glad you enjoyed reading through it.