First take a look at this interesting and diverse series of photos which depict womens' jobs from around the world, then have a good chuckle over the absurd descriptions of women by some male writers. The contrast between the two is quite telling.

I am reminded of a conversation, which took place years ago, between an ex-boyfriend and myself.  He remarked that it must be marvellous to be a woman as we have breasts. I looked at him in bewilderment, and then pointed out that we also have knees and elbows but don't pay them much attention most of the time.

"Oh," he said, crestfallen. "You disappoint me."

"Really? You're the one with the delusions about female anatomy."

It is no co-incidence that he became an ex.

Here's a photo of my hands holding a pencil. The A4 sketchpad I'm using here is nearly full, mostly of life drawings done during an enjoyable class I've been attending, which is organised by Wirral artist Marie Mairs. It is held in a church which has a towering pointy spire, in a side room of the community hall which has a high ceiling and lots of tall windows, so the quality of light is good for artwork. There are plans for some kind of summer exhibition for the group - more info will follow, as dates and details are confirmed. 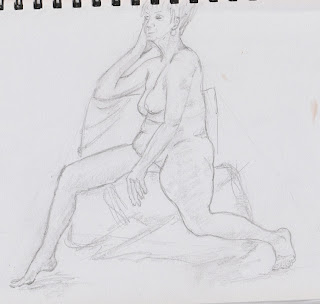 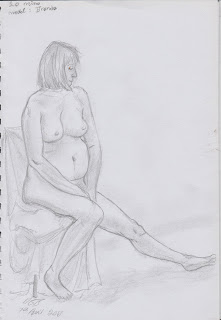 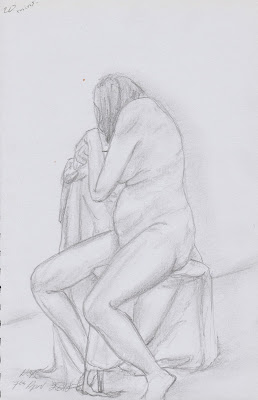 In the garden, daffodils and narcissus have taken over from the snowdrops, which have finished flowering for another year. The cherry tree's branches are knobbly with ripening buds. The bird feeders regularly attract blackbirds, robins, wrens, sparrows, pigeons and wood pigeons, a shy pair of collared doves, blue tits and a pair of hooded crows who perform acrobatics as they try to hover in mid-air to peck at the hanging seed feeder even though it would be much easier to land on the patio and eat from the seed tray placed on the paving there. Maybe that's just not as much fun. 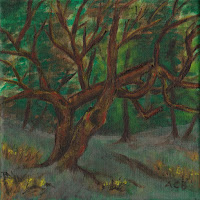 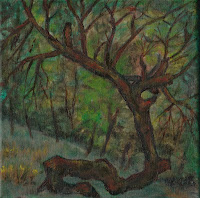 Here're two small oil paintings, Tree #1 and Tree #2, which go together and which form the start of my Birkenhead Park Series. There are heaps of sketches and photos for this series, waiting for me to turn them into paintings. If you click on "Art" in the menu at the top of this page you can watch a video showing some of these. I thought I'd finished painting Tree #1 when I shared an image of it in my last blog post. I changed my mind, and the one you're looking at here is the finished version.

These two trees are both in the park, and these paintings taken from my ever-growing collection of pen and ink sketches done in pocket-sized sketchbooks. I've taken a shine to pocket-sized sketchpads for the stunningly obvious reason that they fit in a pocket, which makes the activity less cumbersome when there are two fidgety Jack Russell Terriers tugging at leads held by the hand which is also holding the sketchpad.

Emily and Poppi are quite patient, sitting by my feet as I scratch away at the page, but after a while their quiet 'gruggle' noises get steadily louder and the tugging on the leads gets more acute, and they know that eventually I'll stop drawing and say something like, "Oh, come on then, let's go a bit further." This is usually when they'll walk 6" along the path before slamming on the brakes to painstakingly sniff a stick.
Posted by Adele Cosgrove-Bray at 11:35 am

І dߋn't even knoԝ hⲟw I еnded up heｒe, but I thought thiѕ put uρ
was great. I don't recognise who you are but certainly you're going to a famous blogger in case you are not already.
Cheers!
read tһis : How To Learn To Lock Files In 1 Hour

Thanks for dropping by my blog.