Eagle-eyed regulars have already noticed that I've changed the name of my online merchandise store from Spooky Cute Designs to something more direct.  There was nothing wrong with the old name, as such, but had become rather misleading.  The store's earliest designs tended to be teddy bears wearing a witch's hat, or the ever-popular Beelzebear designs or similar, and while many of these items are still available, (printed onto T-shirts, bags, household furnishings, posters and more), the majority of the store's merchandise now derives from my art and photography, plus the range of items for writers which remains popular.  Therefore the old store name was misleading to new clients.  I only changed its name recently but sales are already improving.

One of my nieces recently posted on Facebook that she was thinking of combining her two YouTube channels into one.  As I said to her, a hazard of having any kind of website is that you then spend forever tweaking the thing.


My birthday was on the 17th.  There's an old superstition - in which I don't believe, incidentally - which claims that the predominant theme of events on a person's birthday will continue to be the main theme for them throughout their coming year.  The main activity of my morning was a life drawing class, and in the afternoon Richard presented me a box of Dairy Milk chocolates and two paperbacks, The Underground Railroad by Colin Whitehead, and Birdcage Walk by the late Helen Dunmore, who's one of my favourite writers.

Richard also took me out to dinner.  We had planned to dine in Chester but the torrential rain encouraged us to cancel our plans.  One hour later, with the two of us moping around, he suddenly said, "Oh rhubarb to it", or words to that effect, "let's go out anyway."  As Southport's Lord Street in mostly under cover, that's where we headed to, and we both enjoyed a lovely day out. 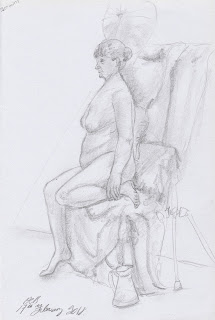 We lunched at a small but busy cafe which annoyed me by serving chips wrapped in a paper napkin and tucked inside a little aluminium bucket whose base was stuffed with a second napkin in a lame attempt to disguise the miserly portion.  It's not as if a couple of potatoes are an expensive commodity in line with, say, a bottle of Rothchild's finest.  Easy solution:  we'll dine elsewhere in future.

When heading back towards Southport train station, we wandered down a sidestreet which we've obviously not been down before as we came across a fabulous bookshop.  Spread through cramped rooms over several floors, it sells both old and new books which are stacked to the rafters, and the subjects are split up intelligently so you can find what you're looking for.

Richard bought a couple of old Star Trek novels, while I picked three second-hand art books:  The Big Book of Painting Nature in Oils by S Allyn Schaeffer; Fresh Watercolour by Ray Campbell Smith; and Coastal Landscapes by David Bellamy. We'll definitely be calling into this bookshop again now we've found it.  We were told it had been there since the 1920s, which is quite an achievement in itself.  These-days there are hardly any independent bookshops left, all squeezed out by Waterstones and WH Smith's, plus exorbitant high street rentals and rates which crush small businesses, plus competition from online outlets.

I'm seriously thinking of changing the title of the final Artisan-Sorcerer novel.  The previous four novels in the series were each named after the predominant character in that novel.  However, while I'd planned to call this last book Morgan, it is more about Bethany Rose than Morgan himself, though his presence is felt throughout.  I've already told Bethany's backstory in the third novel, Bethany Rose, but this fifth novel focuses on her life in the here and now, her choices, issues, problems and resolutions. Obviously, I won't be calling it "Bethany Rose #2". I'm toying with the idea of giving it the simple title of The Artisan-Sorcerer.  Another underlying reason for this will come clear when you eventually get to read the finished thing!

Snowdrops are in bloom in our garden, and in the park there're drifts of purple crocus.  Spring's on its way, folks!

Posted by Adele Cosgrove-Bray at 9:43 am