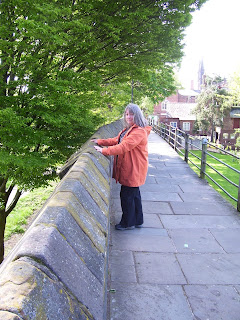 Here's a photo of me, standing on the old Roman wall in Chester.  Richard and I were there on Tuesday, pottering round the city's various junk shops and art galleries.

We went into Alison Bradley's artist-owned gallery, and enjoyed a pleasant chat with her partner, who told us Alison uses a combination of sketching and photography as a basis for many of her paintings.  We both really liked her work, and it was interesting to see her treatment of the Liverpool waterfront which I've only recently painted.  Her studies of working sheepdogs and the landscapes of Wirral and north Wales are admirable.


Later, we had the real pleasure of listening to Ed Alleyne-Johnson busking on his electric violin in the cathedral square, near the bus station.

My old pal Sylvia Taylor has been on TV.  As I don't own a television set I've been unable to watch her work as a support artist in Little Boy Blue, a four-part drama about the real-life murder of a Liverpool boy, but I'm thrilled for her that her acting career is coming along.  She's also a playwright, brass band player, Brownie Guide leader, enthusiastic tent camper and cyclist, and she's currently doing a BA degree with the OU  - this is one busy lady! 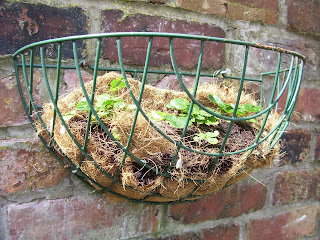 I'd noticed that the coir lining on my two wall baskets were looking bedraggled, which is odd as they're brand new.  The baskets each house three young strawberry plants, which had been left untroubled.  Then I saw the culprits - a pair of robins,who were enthusiastically tugging out beaks-fulls of the lining material, probably to make a nest with.  They've now pecked the lining down below soil level, so I have a choice of letting some soil fall out or buying a new lining, which they'll only peck at again.
Posted by Adele Cosgrove-Bray at 10:40 am