I'm enjoying a spot of annual leave this week, which began with a lively and well-attended writers' event at Bebington Library on Saturday the 19th.  This featured members of Wirral Writers, Bebington Bards, the 3Ls Creative Writing Group and Riverside Writers.  I'm no longer a member of Riverside Writers due to constraints of time, but I had been invited to join in anyway. 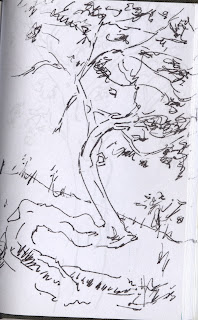 Due to there being so many writers and poets wishing to read, a strict time limit was imposed and so the audience only heard half of my 1,600 word story, Fame, which is about an obscure, ageing rock singer who has turned up on Facebook.  It's a story about reminiscing and unachieved ambitions which still tempt.

My sister Evelyn came to the library event, and afterwards she and I travelled to my home with my friends Tim and Nigel, where we all socialised for a couple of hours and caught up on news.

I've been generally tidying up the house.  It is now half dusted.  I'll admit I'm no lover of housework, but on the other hand I can't abide a mess.  The garden's bugging me now, as the roses and a few shrubs need pruning back ready for winter but it's either been raining or I've been busy with other things.  Weather permitting, Richard and I plan to blitz the garden between us at the weekend.

I've been out most days, walking my dogs and doing a bit more sketching in the park.  Some of the results are shown here - all very rapid sketches, taking no more than a few seconds to do.  With the moorhens, I added a touch of colour later on; they look more like cartoon moorhens than real ones, but I like 'em.

Richard and I arranged to meet after he'd finished work at 11am, and so we had a walk round Liverpool One, which was very quiet whereas Church Street and Bold Street were densely crowded.

We had lunch in Wetherpoon's.  I had to ask for our mugs of tea to be filled properly, as they were handed to me barely 3/4 full.  I had the cottage pie, which was nicely done but of modest proportions.  Placing a mini gravy dish beside the small pie dish set on a bigger plate and served with a spoonful of frozen peas did not fool me into seeing this as a full-sized meal. Richard ordered the All-Day Brunch, which turned out to be one fried egg, two small slices of bacon, a spoonful of baked beans, a sausage and a few chips.  This meant that my diabetic husband needed to immediately go to the nearby chippy to get more carbs to stop him from going into a hypo. We won't dine with this company again, which is a shame as they used to be good.

We headed into St John's Market, which looks a lot smarter and brighter than it used to, and crowds of people were browsing the main area.  The old-fashioned market stall section has been given a complete overhaul and has its official re-opening today.  However, most stalls remain vacant.  We got chatting to a total stranger, a man who was obviously thinking along the same lines - the place looks good but where have all the traders gone?
Posted by Adele Cosgrove-Bray at 11:31 am