Quotes from "Fabian: An Artisan-Sorcerer Story"

Here are a few short quotes from Fabian to tempt your appetite...

Grief is a weird thing; it hides beneath the surface and rises like a shark from the depths of your soul when you least expect it.

If a person worships money as their god and devotes all or most of their time and energy to its accumulation, feeding the spiritual with only fragments of their energies, then the spiritual will starve. Wealth in itself presents no obstacle to the spiritual. On the contrary, financial independence can bring freedoms which would otherwise remain beyond reach. And mastery of the material world is an often-overlooked facet of mastery of the self. There is no place in our Order for those who pretend to be an Adept when they can't even pay their own bills.

For all those years, she had ached for the future. So much time had been spent imagining how life would be, how events would unfold, how perfect everything would turn out in the end if only she kept hoping it would be so. And here she was, once again wishing things were different from reality. Another bushel of 'if only'. She had lain down in the bright green pasture she'd longed for, only to find it had plenty of thistles and cow shit of its own.

The creature's front paws plunged deep into Jason's chest. A thinly rasped scream tore through his rigid paralysis. Raw agony convulsed his arching spine. He could not believe he could endure such pain and still live. He was going to pass out. Silver and red flooded his bulging eyes. Tiny veins in his eyes burst. Then Jason knew what attacked him. This was no flesh-and-blood animal which had somehow slunk into his locked and bolted bedsit. This beast was an astral-dwelling fiend; a hunter with the mind of a man who could travel anywhere and assume any shape. A shape-shifter. A werewolf.

Louise felt an invisible fist slam into her solar plexus. Spiny psychic suckers plunged into the inner-most cortex of her nervous system. She cried out in pain as she felt her energy draining swiftly away, as if the life of every orange-red cell was ripped out of her. She flailed her arms, trying to hang-on to something solid, but her sence of balance swung wildly off kilter. She lurched fowards, cracking her forehead against the edge of the table as she crashed to the floor. Her chest was a needling spike of pain. Her heart was struggling.

"Fabian, enough. Fabian, I said stop. Stop it!", screamed Bethany Rose. "Stop it, or I'll stop you myself!" 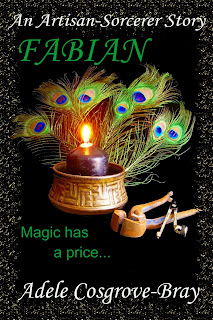 Use the links at the side of this page to purchase your copy today.
Posted by Adele Cosgrove-Bray at 11:26 am

Email ThisBlogThis!Share to TwitterShare to FacebookShare to Pinterest
Labels: fabian