Saturday, 19th November will find me at Bebington Library, Wirral, when along with other writers I'll be reading one of my short stories.  The event starts at 2pm, so if you're in the area do come along.

It's absolutely ages since I took part in a similar event, and I've yet to decide which story I'll be reading.  I've so many to choose from!

I had my hair trimmed on Saturday, then decided to go for a walk round Birkenhead while I was there, reasoning that I'd be able to have a look for some new jumpers for the coming winter without hubby helping - which translates as him enthusing over monstrosities which only a neolithic troll might perceive as stylish. Great idea!  So I walked into the very first shop I came to, and who was the first person I saw?  Yes, Richard.  He was at the counter, buying the latest in Joseph Delaney's Spooks series.

We both really enjoyed the Spook's Apprentice series, but didn't take to the film at all.  The film's plot is quite at variance from that of the novel series, even allowing for the requirements of a very different medium.   Anyway, each to their own.

October 31st was our 20th wedding anniversary, and to celebrate we had a three-course meal at the Oxton Bar & Kitchen.  I did take a couple of photos but they are awful.  We both look quite forlorn in them.  My brother Eric said I looked like I was crying, when actually I was enjoying Parkgate ice-cream served with hot chocolate sauce.  I  posted the photos on Facebook if anyone can be bothered to look for them.  Anyway, in all truth we had a lovely meal.

Over the last year or so, I've been doing a series of rapid ink sketches around Birkenhead Park.  Many of these are of the ducks and geese, and the sketches have to be rapid as birds never seem to stay still for more than a few seconds.  There are also some studies of trees, looking at twisty shapes.  I've some photography of the park, too, (such as the photos in this post).  I'll probably turn the best of the project into a YouTube video eventually but I'm also toying with ideas for a small number of themed paintings - oils or watercolours, or maybe both.

Richard and I enjoyed a day out in Chester, which is one of our favourite places.  I sometimes toy with the appealing idea of moving there when I reach retirement age.  Richard laughingly says he'll not move house again unless it's when he's in a pine box, but I've always had itchy feet.  I love this house, though...but there's a world of lovely houses out there waiting for discovery.


I went to see my friend Tim's second exhibition of model castles, which was delightful.  This time he'd decided to show some of his gorgeous toy theatre collection, some of which he's had since he was a boy.
Click on the photos to view them in a larger size. 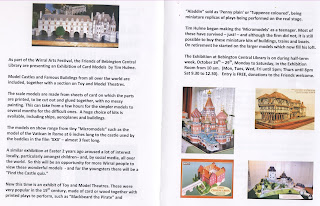 Posted by Adele Cosgrove-Bray at 10:01 am