While you're waiting for Fabian, the fourth novel in the Artisan-Sorcerer series, to become available - and it is coming soon! - have a play with this on-line jigsaw puzzle of the Peacock King, who features in the forthcoming book.  (The image is in much better focus on the jigsaw site).

One year ago, we moved to this house.  It's incredible to realise that this little anniversary has arrived already.  Moving here was one of the best decisions we've ever made.  We're both still in love with the place.

Last Saturday we scraped off old wallpaper in the dining room, up to the level of the picture rail.  Recently we had some repairs carried out on one of the walls in that room, and now the new plaster has had plenty of time to dry out properly.  Sunday saw me unravelling the mysteries of how to hang 7ft strips of patterned wallpaper without getting it in a glorious knot, tangled round the stepladder or stuck to the wrong bit of wall.  By 3.30pm I'd managed to do three-quarters of the room, and decided to finish it off next weekend as I was feeling pretty finished off myself by that point.

The pattern is an embossed leaf design, all curving fronds and arching stems.  It can be painted but right now it's snow white, bringing to mind a huge Elvish wedding cake.

I'm still working away on my NVQ course, and thankfully the end is steadily drawing closer.  My tutor has said I'll have finished the entire course by September at the latest.  I'll be glad to reach that goal if only as this will free up much more time for creative projects which have had to take second place to the demands of the course.

On February 29th, I gave a talk on Wirral pirates and smugglers.  The private audience really enjoyed it and kept me talking on local history for longer than I had anticipated.  I'd illustrated the talk with photos of some of the places mentioned in the talk, such as Hilbre Island, various tunnels and caves, Mother Redcap's notorious tavern, The Halfway House, (demolished now, more's the pity), and the Wallasey-born privateer Fortunatus Wright's dagger. 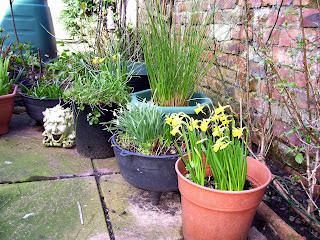 The research for the talk will probably find its way into my writing.  I've already featured the Hilbre pirates and smugglers in a couple of short stories, namely Spanish Jones and Seagull Inn, (the latter being featured in a Hadley Rille Books' anthology called Ruins Terra).  The River Dee selkies, who are descendants of Spanish Jones himself, feature briefly in Rowan but more heavily so in Fabian.

Daffodils, snowdrops and crocus have all come into flower at the same time.  My crocus seem greatly reduced in number, so maybe transplanting them from my old garden to plant pots for the new garden wasn't particularly successful.  Once the garden wall has been re-built, I can begin working on the border which runs alongside it, which I want to broaden.  There will be plenty of room in that for new spring bulbs.  It's lovely to see these vibrant splashes of colour as winter receeds.
Posted by Adele Cosgrove-Bray at 10:35 am