Wild Swans and Stuff in Frames.

Birkenhead Park is currently home to two adult swans and their seven cygnets.  They're a delight to watch as they sail majestically through reflections cast on the water by autumnal trees and shrubbery.  The colours of the foliage are striking, and the ground is already thick with a crisp carpet of fallen leaves.  Everywhere you look, grey squirrels are munching acorns, fattening up for the coming winter.

Our dogs found a frog in our garden last night, the first amphibian we've seen in our new-to-us garden.  The one thing I miss about our old house is my frog pond.  I've been eyeing a corner of the lawn, with a view to creating a new one here.  It's a project which will have to go on the To Do list.

Meanwhile, I continue to work away at my second NVQ Level 3.  I have two modules, totalling 6 credits, left of the mandatory modules, and then I move on to the optional ones.  There is a huge amount of writing involved - enough for a novel, even.  Though I suspect it would make for spectacularly dull reading...!

I also attended a First Aid/CPR course where I learned that sealed bandages go off, which is something I'd not heard of before.  I'd last done a similar course some six years ago, so I was long overdue for a refresher.  I 'killed' my dummy human twice before managing correct CPR.  I sincerely hope some poor person never has to rely on me to save their life.  Making rubber breathe is harder than it looks. 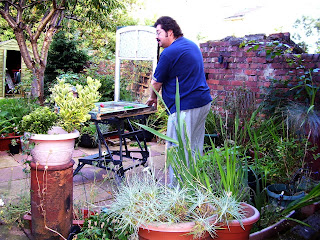 Our immediate neighbour is renovating his house.  He has begun installing new windows, and threw the old Victorian sash-cord frames in the skip.  I spotted them and mentioned to Richard that they'd make a cold frame.  So Richard asked if he could have them, and then he set about assembling the sides using steel L-shaped brackets.  The lid is held on with two steel hinges.  He painted the wood with green-coloured sealant, and that was all there was to that little job!  Now we have a functional cold frame to over-winter some of our more delicate plants inside.

The sealant was left over from last weekend when we painted the shed with it in preparation for winter.  We had to pull the shed away from the corner of the walled garden so we could paint all four sides.  Trying to push it back into place was much, much harder.

I saw a really good exhibition at the Williamson Art Gallery, which had many contributions from the Wirral Society of Arts.  I wish I'd had time to view it more than once, as I was impressed by the high standard of work.

I've been editing and re-writing bits of Fabian.  I had hoped to have this ready for publication by 1st December, but I'm going to put it back a little.  I would much sooner take my time with the MS and get it right, than rush ahead and release something which I know isn't quite ready.  My original aim was to have completed the first draft by the end of this year, and I have achieved that.
Posted by Adele Cosgrove-Bray at 11:43 am

We are a group of volunteers and opening a new scheme
in our community. Your website offered us with useful information to work on. You have performed an impressive job and our entire group will probably be grateful to you.