Ducks, Bucks and a Bit of Sad News. 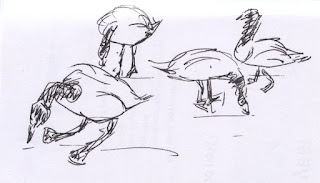 My brother-in-law, Andrew Hart, passed away on the 10th August.  He suffered a heart attack, following a stroke earlier this year.  His funeral took place on the 21st, at Southport Crematorium.  Andy was known on the northern club circuit for his singing, and in younger days for his musical contributions to Golborne Brass Band, The Philtones and the David Charles Dance Band.

I was unable to attend the funeral, having started a new day-job all of nine days before this.  I've been talking to my sister Evelyn, though, and nagging her well-meaningly about eating decent meals and taking care of herself, making a joke of "sounding just like Mum".

There's not much anyone can really say at times like this.  It's instinctive to want to fix things for the person going through an awful experience, but really all anyone can do is simply listen. 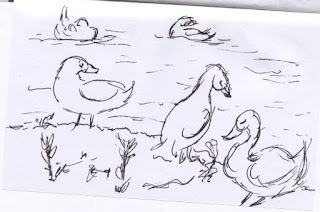 So, I started a new job...  I'm still doing arts and crafts, and similar life-enhancing activities, but for a different company.  Having moved house in March this year, I wanted something more local to my new address as travelling to my old job added approximately three hours onto each working day - crazy, considering that I was only employed for four hours a day anyway.   Not only did I get my wish, location-wise, but I got a pay rise too - and I still only work four hours a day, which suits me fine as it leaves plenty of time for writing.  The new place seems like a pleasant working environment, and my new colleagues have been friendly and welcoming.

When I was still quite new to writing, I was genuinely surprised at how many of the other writers I met, either in person or through social networks, also held down ordinary jobs.  There was one  moderately well-known newspaper columnist and author of several non-fiction books - I won't name names - whose conversational, narrative writing style I'd admired for years, who still works as a postman as this, he wrote, is what actually pays his bills.  I know other writers, who have been traditionally published several times who also work as hairdressers, or with autistic children, as call centre operators or in sales, etc.  Unless they've retired already, or have a partner who is willing and able to support them, almost all the published writers I know also have day-jobs.  These aren't day-dreamers, the kind of writer who talks about writing but doesn't actually do much of it; I'm referring to skilled, imaginative, working writers, some of whose names you'd perhaps recognise.

It's pouring with rain as I type this.  Last night, a tremendous thunder storm raged overhead, with huge, jagged forks of lightening cracking through the sky, making the sky look pink for a second before it plunged back to grey on black as torrential rain hammered down, turning the pavement into a stream.  Liverpool, usually visible over the river from our home on a hill, was engulfed in a thick bank of smoky-charcoal cloud.  This morning, the park smelled of wet soil and saturated leaves, and the pond banks were a muddy border flanked by dripping foliage, freshly patterned by webbed feet.

Speaking of ducks and geese, I've been doing a series of rapid sketches in the park using a very small pad and an ordinary fine line pen.  They fit into a pocket easily.  I've shared some of the results here.  I enjoy sketching - always have.
Posted by Adele Cosgrove-Bray at 3:45 pm