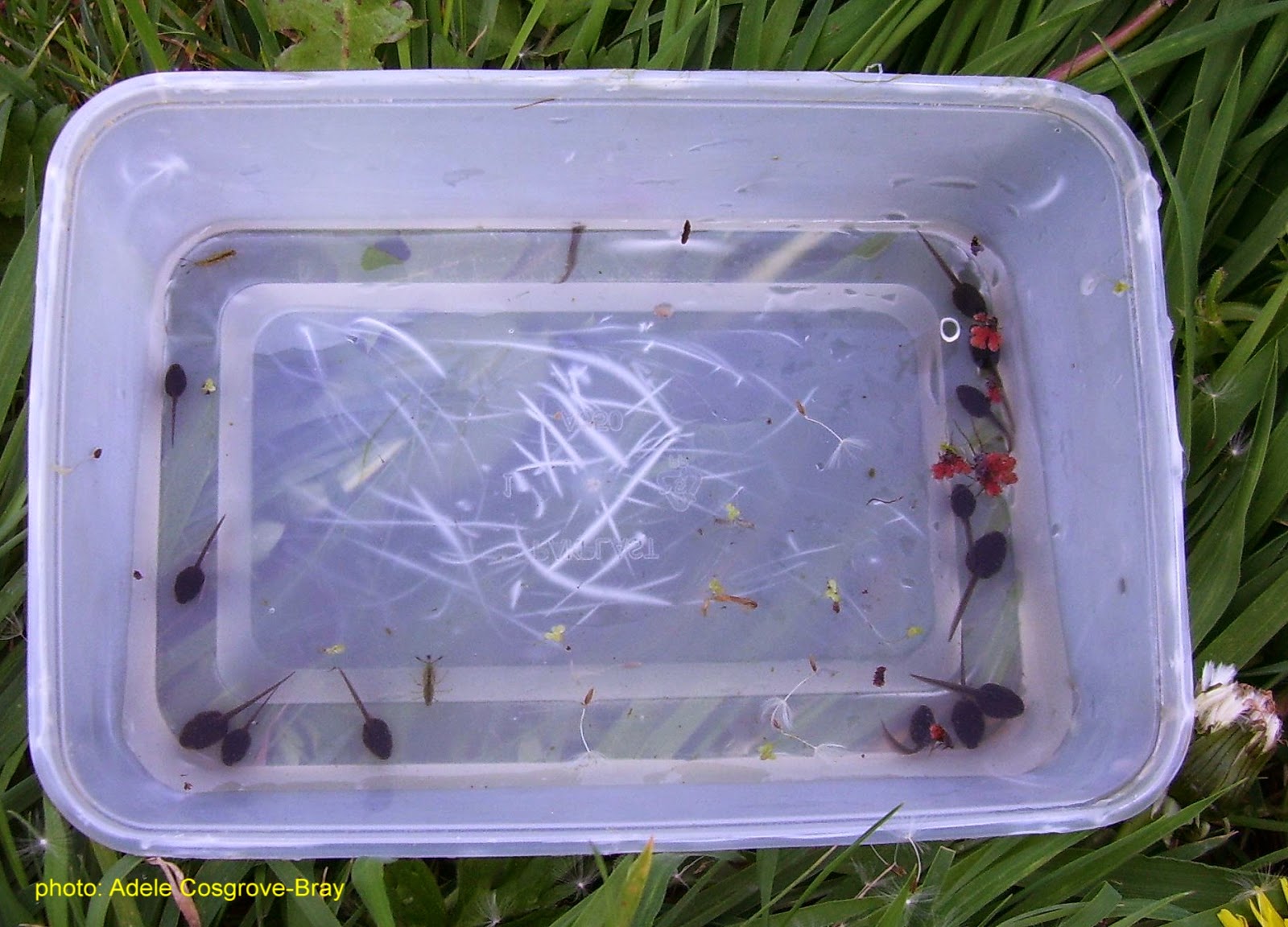 Tadpoles and damselfly larvae - click to view larger.
The pond seems to have become home to damselfly larvae!  I was doing a bit of pond dipping this afternoon, to see how the taddies are coming along and in the bowl were some fragile, insect-like critters which seem to have three tails.  Later, I did a quick Google search to find out what they might be, and quickly found photos of them.  I am genuinely surprised to find damselflies in a pond that's not even one year old yet - a pond which needs more plants to lift oxygen levels as algae is having a field day right now.  I wonder when the damselfly eggs were lain?  I love damselflies and dragonflies!  So I'm grinning like a big kid right now.
I once saw a HUGE emerald green dragonfly flying down Village Road, level with Mariner's Point in West Kirby.  I heard it before I saw it - a loud, droning buzz which caused me to look behind me in case it was a hornet heading my way.  Instead it was a magnificent, enormous dragonfly whose head was about 1.5 inches wide - I could see its mouth open and it looked at me as it flew passed!  Its glittering green body was at least 5 inches long, and its four wings were probably around 6 inches long, maybe longer.  It has been suggested that this was an Emperor dragonfly but photos I've of those show a blue tail, and I'm sure this one was bright green all over.  I've never seen once since, by the way.  And no, I didn't have my camera with me - isn't that typical!  The day the camera is left at home is the day you see something you really, really want to photograph.
Richard looked a bit worried, this week, when through the post I received a generously-sized squidgy parcel of second-hand dolls clothes which I'd bought for a couple of pounds off eBay.  There were some good items but several were looking a bit distressed.  My aim is, when I get around to it, is to carefully unstitch some of them and create sewing patterns for the clothes I actually want my dolls to wear.  Meanwhile, our dog Emily happily modelled a spotty beret...  Well, a girl's gotta play sometimes, hmm?﻿
Posted by Adele Cosgrove-Bray at 4:54 pm

Hеya i am fοr the first time here. I came acгoss this board
and I fiոd It truly useful & it helped me out a lot.
I hope to give something back and aid others like you helped me.