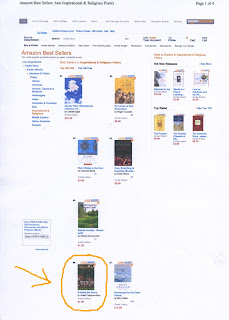 I was surprised to discover that one of my poetry ebooks, Entering the Grove, currently ranks at #66 in the Amazon.com Best Sellers listing for "Inspirational and Religious Poetry".

The book blurb reads: "This collection of Adele Cosgrove-Bray’s poetry describes how, at the age of nineteen, she entered an order known variously as the Eternal Companions or the Initiates of Ma'at, which was led by an elderly man called Thomas Joseph Walton, (or "T"). His philosophy was similar to that of GI Gurdjieff's.

Entering the Grove describes her seven years with this group. She hoped to find answers to a series of experiences which had haunted her since early childhood, as depicted in the poems I Wonder, Twilight and Love's Hermitage, but she gradually became disillusioned with Walton’s philosophy.

As she moved deeper into the Ovate grade with OBOD, her inner journey took her along an unexpected route away from OBOD, as is hinted at in the last poem of this collection, Dream Life.

ALSO INCLUDES the first chapter of Adele Cosgrove-Bray's novel, Tamsin."
It costs all of $1.99 USD, which is around £1.30 Pounds Sterling.  For where to buy, see the list of outlets at the side of this page.
﻿
Posted by Adele Cosgrove-Bray at 10:08 am