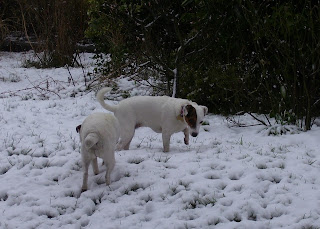 Emily and Poppi inspecting this morning's snow.
It was not my intention to photograph my dog's derriere, however this is the best of this morning's three quick snapshots.  Two seconds later, both dogs had sprinted back inside having already had quite enough of cold paws thank you very much.
I've been busy finishing off several projects, including an NVQ Level 3 in Customer Care which is now 98% complete.  It would have been finished entirely if my tutor hadn't resigned last week, which means I now have to wait for another to be employed by the college.  I'm not best pleased, as I'd like to have the course over and done with, but these things happen.  I've also been doing another job-related course, which is now two-thirds complete.
On the writing front, I'm currently working on a piece destined for Riverside Writers' forthcoming anthology of short stories and poetry set in a fictional apartment block in Liverpool city centre's trendy Ropewalks quarter.  Submission guidelines, if you're interested in participating, can be found here.
The first draft of Fabian is almost at the half-way mark, and I'm hoping to get this finished by the end of this year if not sooner.  Obviously the novel won't be available until 2014 sometime, once it's undergone umpteen edits and tweaks galore, but this is the way of all first drafts!
Meanwhile, sales of the other Artisan-Sorcerer books are ticking away steadily.  I've been selling far more with Barnes & Noble and Sony than I have with Amazon, though I've no idea why.
Anyway, all work and no play...  And so last Saturday, hubby took a day off from the studio and we enjoyed a pleasant day out in Chester.  We both wanted new clothes.  We ended up with new walking boots and undies but, hey, it's a start.  Why are so many women's blouses totally see-through?  Or have necklines so low that, being 5' 1.5" tall, I'd have to wear another top underneath?  I wanted items which could be worn at work, and as my place of work has the heating on full blast right through the summer, even during a heatwave, wearing layers means you're way too hot for comfort. 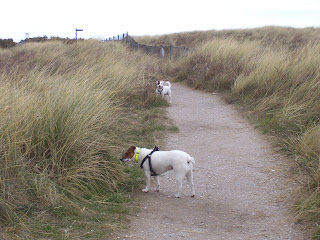 The boardwalk on West Kirby beach, leading to Hoylake.
On Sunday, we walked a circuitous route along the boardwalk which runs from the sand dunes on West Kirby beach, over marshy ponds where tall yellow reeds provide a home to countless birds, and over to Red Rocks at Hoylake where we sat down for five minutes while the dogs investigated rock pools.  From there we walked along Stanley Road to the King's Gap, then passed the dairy farm on Newhall Lane, which becomes a public footpath between fields until it passes the entrance into Gilroy Nature Park and the exit onto Gilroy Road - and from there, to home. 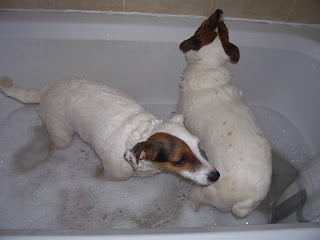 After the walk, the only solution...!