A Friend for Emily! 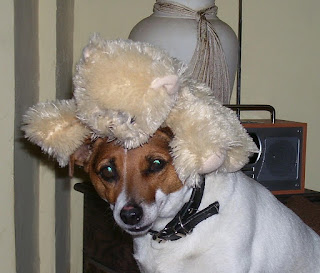 Emily and her current favourite toy.  Note its missing nose.
Emily really hates being the only dog in the house.  We had hoped she would have become used to it by now, following Ygraine's death, but that hasn't happened despite extra cuddles and heaps of new toys.  She was starting to worry us.  There is absolutely nothing wrong with her physical health but she is depressed.  All her life, she's been around other dogs.
So Richard suggested we look around for a rescue dog.  A brief internet search produced a whole army of Staffordshire Terriers, Bulldogs, Mastiffs and similar dogs needing homes, but neither of us like them.  We wanted a small, lively, good-natured dog who would get along well with Emily, plus our cat Jazzy and the chickens.
So Richard and I, and Emily, travelled to the animals sanctuary.  I had spoken to a young woman there via telephone earlier, and she met us in person as soon as we arrived.  She asked if we had young children (no) or planned any (think 'when it's a cold day in Hades'), if we had a dog-proof garden (yes), and so on.  And of course Emily was there as living, waggy-tailed proof that we really do know how to keep dogs.
Then we met a white and tan Shih Tzu named Buster.  He's two years old, and apparently his previous owner can no longer look after him due to having developed serious health problems.  Buster and Emily were introduced in a spacious, secure grassy compound.  Emily was uncertain - not aggressive at all, but wary (but then she had travelled on two buses and a taxi to reach the animal sanctuary, and she's not used to this).  Buster was bright-eyed and inquisitive, and wanted to play.  Emily turned her back on him and sat down.  The sudden movement of a football made her forget her aloof disdain, however - and she sprinted after the ball with Buster at her heels.  She quickly came back to me, though, and sat down again.  She was too hot and edgy from travelling to feel like playing.
Buster is booked in to be neutered sometime this coming week.  He'll be coming here on Saturday 14th.
﻿

Posted by Adele Cosgrove-Bray at 11:51 am