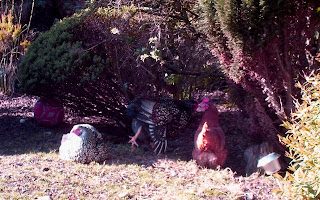 Penny, Felicity and Joyce enjoying the spring sunshine.
Last night I discovered a flavour which I hate even more than aniseed, and that is cardamom.  Big pods of the stuff were in the curry which I had been really looking forward to, as I love a good curry.  Then I was attacked by what surely has to rank as being amongst the most vile flavours on earth.  People like this stuff?!!   Wikipedia describes it as having a "strong, unique taste".  I agree.  It's also revolting; spectacularly so, even.
Each to our own, of course.  This body of mine has always had a strange relationship with some foods, which seems to run contrary to average reactions.  For example, peppermint tea, which is supposed to settle upset stomachs, actually makes me feel nauseous.  Salad, beloved by millions, gives me excruciating indigestion, as do certain dark green foods.  Echinacea, which is supposed to boost the immune system, gives me splitting headaches.  I could go on, but I'd only bore you.  Besides, it's not an issue as I learned how to work around these things long ago.
Yesterday also brought a pleasant surprise, though.  While walking through Ashton Park and enjoying the spring flowers -  the narcissus and hyacinth border around the main bowling green smells heavenly right now - the elderly lady I was with wanted to have a closer look at St Bridget's Church.  To our surprise, we were invited inside.  My companion, who has been a church-goer all her life, was thrilled to be able to have a look inside this lovely old church.  Apparently this site has been used as a religious centre for over a thousand years, though the oldest parts of the existing building date back to the 14th century.  Other parts of the building are from the 15th and 16th centuries, though major restoration was done in Victorian times when the stained glass windows and the iron grill partitioning the Lady Chapel were added.
Of particular interest to me was the 11th century Viking Hogback Stone, a relic of the old Norse settlement here in West Kirby.  It is believed to have been ﻿a grave marker.  It's an oblong stone, carved with a rather typical interlaced design at the base of the front, and with half-oval lumps across the upper two-thirds of the front.  Perhaps the lumps signify grains, or feathers - it's open to speculation and interpretation, really.

Posted by Adele Cosgrove-Bray at 10:30 am

Hi Adele
I came by way of Rachel Cooper's blog. thanks for doing the interview there. It was nice to have my feelings and views about self-publishing reinforced. BTW, I don't have strong feelings about cardamom one way or another, but i love the way you express its vileness:-)

You're most welcome, and thanks for your visit to this blog. Drop by any time.