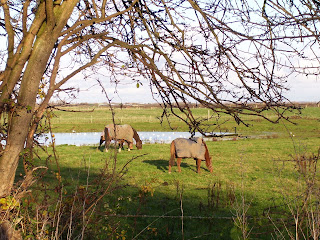 The mid-afternoon sun was streaming through newly-revealed branches, keeping the top layer of fallen leaves crisp.  These mounds of leaves are apparently enthralling, at least to my dogs who seem compelled to inspect in detail each undulating heap.   Puddles command similar attention, which means that a walk which should take under an hour actually took closer to one and a half.  But it was a lovely autumn day; there was no reason to rush. 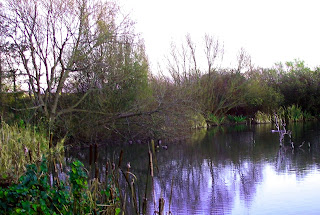 The bulrushes have shed their fluffy wigs now.  Ygraine once savaged some poor bloke's prize pampas after it made the mistake of waving in a breeze.  And as much as she loves a good swim, trying to fish a dog out of a deep pond whose banks are slathered with greasy black mud is not my idea of a fun diversion during an otherwise pleasant stroll.  Therefore Ygraine has to be restrained around anything tall and wobbly like bulrushes.﻿ 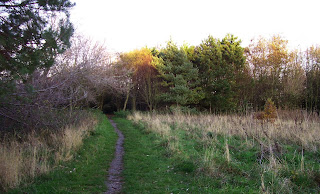 As the late afternoon sun cast amber-gold over the tree tops, we headed into the little woodland then out amongst the snarled and drying grasses.  This is Emily's favourite bit.  She springs through the tickly grass stalks, pretending to be a great hunter, ears upright, dark eyes sparkling, nose snuffling like a Dyson.  Once, she caught a sock.

Anyway, as I type this they're both snoozing.  Emily is on a trampled-flat cushion which she's not supposed to be on, and Ygraine is in Woolly Jumper Corner.  That's a heap of old Arran jumpers which sent any wearer into a frenzy of frantic itching, but the dogs like them well enough.

Posted by Adele Cosgrove-Bray at 5:16 pm