Photos Which Make You Smile 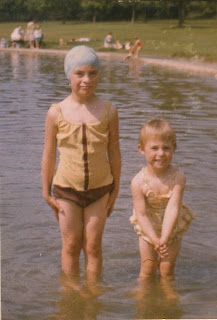 Hazel and Adele, a long time ago...
There are some photos which simply make you smile.  They might not be the most professionally done or the most artistic, but they're precious in their own way.  Like this one, above, which shows my sister and I paddling somewhere near Southampton.  I totally forget the name of the place; it had three shallow pools in a row, and I recall feeling incredibly adventurous for walking through each of them all by myself.  We visited this place more than once during various visits to my Aunt Kathleen and Uncle George's home.  My four cousins were probably paddling not too far away, just out of camera shot. 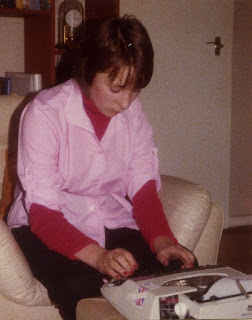 My first typewriter, a Smith Corona, which was a Xmas present shared with my sister.  I used to type poetry on this before mailing it off to various magazines.  Some of it got published, too...  This machine worked well for many years until the carriage developed an annoying habit of jumping spaces or of not moving at all.  This didn't exactly aid presentation - rather like that vile pink top, hmm? 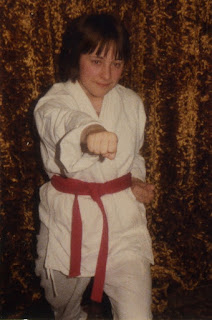 I studied Shotokan Karate for a while when I was in high school, at a dojo run by Theo Humber.  I enjoyed karate as a sport and for learning some self-defence. 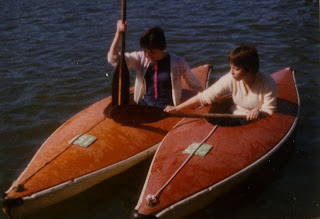 Here's Adele Hayes (nee Bilsbury) and I, canoeing in Scarborough.  She'd joined my family for a week's holiday there, and we had a great time.  One afternoon, the two of us decided to take a chairlift ride to the beach.  It began with a gentle ascent of a long grassy slope.  Then the ground fell away as we sailed over the cliff edge, revealing the beach at least a thousand feet below.  (What, exaggerate, moi?)  We were convinced the chairlift would fall off the wire with every stanchion it rattled over.

Posted by Adele Cosgrove-Bray at 9:37 am