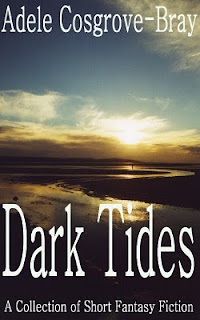 
About the stories in Dark Tides…

Liar: Can you separate fact from fantasy in these words from a born liar?

New Year’s Day: Tom had always known that Louise would leave him. That’s what selkies do. So why did he marry her?

Snack Time: A chance conversation has surprising consequences in this chilling tale which introduces Fabian, from the novel of the same name.

Rebirth: After the closing of one door and before the opening of another, there is a dark journey to be made.

Swap: Learn why the tidal River Dee never returned to the harbour at Parkgate in Wirral, in this tale of the notorious Caldy fae.

The Four Seasons: A whimsical exploration the generation gap and levitation.

The Princess Cave: An elderly mother reminisces about her encounter with the selkies of the Dee Estuary.

Song of Earth: Ancient archetypes run riot through this, the only poem in Dark Tales.

Punch: For everyone who views office parties with a sense of impending dread.

Food: When four schoolboys play truant, they bite off more than they can chew in this tale of the Caldy fae.

The Solution: An artist’s models proved unreliable until a solution was found.

Clara’s Wristwatch: Childhood can be a magical time, but some games lead to danger as Clara discovers in this contemporary faerie tale.

Watcher: The terror which dragged Joanne to the brink of insanity returns. What will it take to get her attention?

Posted by Adele Cosgrove-Bray at 1:01 pm