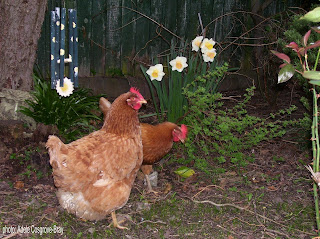 With spring now well underway, perhaps it was inevitable that Riverside Writers latest meeting turned into an informal discussion about the passage of time and how much people hoped to achieve, writing-wise, during the coming year.

Several people mentioned frustration over poor responses to submissions.  That's when they even get a response!  Despite the reply-by times offered as part of submission guidelines, in practice many agents and publishers don't reply at all, not even with a pro forma email.  Meanwhile, the writer is left dangling, waiting to receive a response to the MS they spent several hours tweaking in order to fulfill each set of submission guidelines.  Weeks turn into months, and no reply comes.

For my part, in one instance I received a 'thanks but no thanks' letter from an agent one entire year later, though they claimed to reply to queries within six to eight weeks.   In another case, an anthology which accepted one of my stories in 2007 still hasn't been published.   In another case, a theatre group called for monologues then never bothered to do anything with them - but also never bothered to reply, despite my queries.

So why is this?  These are talented, marketable writers with established web-presences (ie. a ready market).  They have a good body of work in their portfolio.  They have taken part in literary festivals and/or been on local radio.  Many have had short stories and/or poetry published already.

One person said that if they tried to hire a plumber or electrician and were treated with such off-hand arrogance, they'd simply hire someone else.  Any writer's submission is, after all, a business proposal and all business ventures require a degree of mutual respect and courtesy.

Another person said it had been due to this lack of any interest from traditional publishers and agents that they had been seriously considering self-publishing.  These-days it's easier than ever to create an e-book or POD self-published book for minimal - or even no - financial outlay.  But printing a book is only part of the story; a person then has to spend vast amounts of time promoting a self-published book, online and off.   To be fair, most traditionally published authors have to do this too.

A publisher or agent might possibly reply by describing how their inboxes are daily swamped with an ever-growing mountain of MS submissions, and how they have only a limited time to give to reading work from unsigned writers.  They might point out that many MS fail to meet their company's submission guidelines, type of work taken, or are hopelessly amateur.  Yet this simply doesn't apply to many writers.

Such excuses remind me of the nonsense I was told many years ago when attending Job Club, when a 'leader' haughtily informed everyone that the reason most people were unemployed was because they forgot to put postage stamps on their letters to prospective employers.  I kid you not.

I know a number of good writers, who've already had a number of short stories published, who are considering self-publishing their novels because they've already waited for too many years to get a foot in the door of a traditional publishing house.   Some have decided that as they're already in their late autumn of life they'd like to leave something of their work behind for posterity, and they feel that with self-publishing at least their friends and family would be able to share their fiction.  I also know writers who have followed the self-publishing route and sold no books at all.

I suspect many writers reading this could relate to the frustrations of waiting to receive responses to submissions to agents and publishers.  It would be interesting to hear their views.


Read about self-publishing pitfalls here: http://hubpages.com/hub/Self-Publishing-Pitfalls
Posted by Adele Cosgrove-Bray at 10:38 am