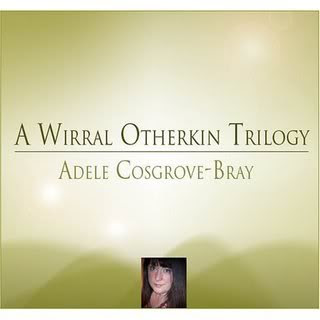 Have you encountered any faeries while wandering the ancient woods and heathery moor of Caldy Hill? While sitting by a dark and peaty pool cradled by mighty oaks and rustling rowans, were you startled by a sudden hush, when all the birds ceased singing and even the restless breezes from the yawning mouth of the Dee fell still?

It is just possible that a faerie may have been passing by. I don’t mean the kind of cartoon “fairy” with a sparkly tutu and gossamer wings. They’re just make-believe. I mean the real, ancient kind of faerie; the kind who can enchant with a glance and whose beauty might steal your heart, if not your soul.

Did you know that the seals which congregate on Hoyle Bank beyond Hilbre Island have a secret other-life? And do you know the real reason why the sea never returned to Parkgate harbour?

Further clarification can be obtained by reading A Wirral Otherkin Trilogy, which was published this week by Amazon.

This trio of Dark Fantasy stories consist of Frog, New Year’s Day and Swap, which are all set on Wirral. Our peninsula has, of course, a rich and colourful heritage from its Celtic, Viking, Roman and Norman settlers. Each of these diverse peoples had their own sets of beliefs and mythologies, and it is from this wealth of folklore that I draw many of ideas for my writing.

A Wirral Otherkin Trilogy is available only from Amazon as part of their Amazon Shorts program, which offers a diverse choice of fiction and non-fiction works, sized from 2,000 to 10,000 words in length. These can be downloaded for only $0.49 (which is approximately 25p in British money), giving the reader an economical taster of an author’s work.

Visit:- http:www.amazon.com then just type the title into their search box.
Posted by Adele Cosgrove-Bray at 10:19 am