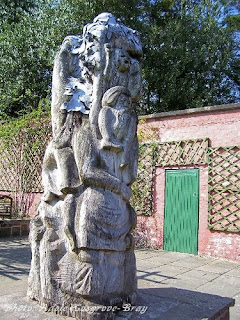 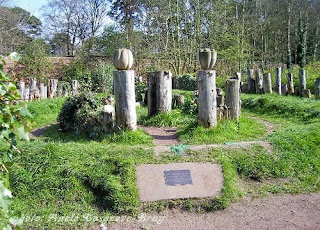 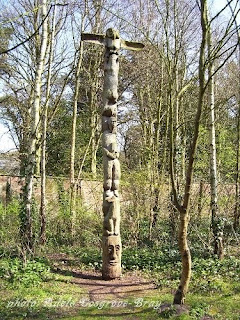 I’ve been busy (noooooo!), as my niece came to stay with us for four days. The dogs did so enjoy taking her for walks. In fact, Ygraine was so eager to show her the ponds beside the boardwalk along West Kirby beach that the poor girl narrowly missed being dragged face-first into the water.

Having strolled the length of Meols Drive, my niece decided that being a multi-millionaire offers certain advantages when it comes to house-buying. We have chosen the ones we want, once we’ve made our fortunes. Forward planning is always advisable, don’t you think?!!

And we discovered that Wirral has totem poles. Well, one, anyway. This was within the enclosed Walled Garden at Royden Hall. (If you wish to read about that, scoot over to my spot on the Wirral Globe.) There were numerous other sculptures too, and if you wish to see more photos just click on one of the images here and view the Wirral photo set on my Flickr site which you’ll be automatically taken to.

Oh, and we watched a few films: Alexander the Great with Colin Farrell and Jared Leto (who a certain young lady is rather impressed with); Evil Aliens, which she hated and which we thought was hilarious; Beloved, which is one of my favourites; and one of her personal favourites, The Phantom of the Opera, the musical with Gerard Butler, which she happily sang along with word-for-word.

“So,” she asked, “would you marry (whatisname) or the phantom?”

“The phantom, definitely,” I said. “He seems much more fun than the other bloke.”

“That’s what my mum says too.”

“He lives in a sewer,” said Richard, wrinkling his nose. “He’d stink.”

Hmm, that would be distressing. And also puzzling, as how is it that his stealthy presence in the opera house was not swiftly revealed by wafts of the distinctive associated pong?

Next: a shopping spree round Grand Central, of course! For those not in the know (and after all, why should you be?) this is a collection of small shops dedicated to gothic/alternative clothes, accessories and gadgets, all housed in what used to be a hotel. While she bought a funny hat, the seller asked her if she was going to Glastonbury this year.

He quipped, “That’s old enough for Glastonbury! Old enough to drink, to vote, to get married…”

He nodded his head happily. “I get it; ‘While you’re under my roof you’ll live by my rules.’ That’s what my ma always said to me. So when I was nineteen I left home.”

Soooooooo, having waved her off on her train journey home, I returned to the task of editing and polishing Seagull Inn in time for the submissions deadline of April 15th. Having achieved that, the next task was to begin writing a story for another deadline, on the set subject of mirrors. I had the opening line of, “He had a new haircut, a cheap suit and old shoes…”, and everything flowed smoothly from there until Mirror was born. Imaginative title, hmm? But it suits it, so what the heck. The deadline for this one isn’t until June 15th, but I like to give myself time to tweak with an MS before I send it sailing towards a prospective publisher.
Posted by Adele Cosgrove-Bray at 11:11 am