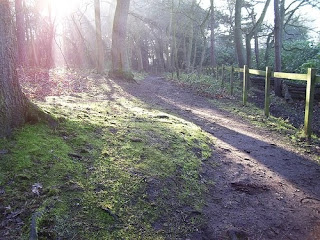 Thank you, everyone, for all the messages of condolence. These have been shared with my family, who were all touched by the responses left in the LiveJournal post.

Yesterday morning, the day of my father’s funeral, began with a snow blizzard. It is still lightly snowing now, as I type this. Ah, how like us Brits to chatter on about the weather….

The catering company had already delivered the cold buffet before Richard and I arrived at my mother's house. Several people had travelled considerable distances to be there. My father’s nephew Philip and his wife Kelly had driven up from Lincoln and had added on quite a detour to collect my father’s eighty-one year-old sister Elsie and her son Clifford. My sister Evelyn and her husband Andrew were there, of course, as was my brother Eric. My sister Hazel , her husband Tony and their two daughters were waiting at Howe Bridge Crematorium when we arrived in the limosine behind the hearse which bore my father's coffin. A number of other people, including my father's neice Thelma, plus two people from the nursing home where my father had lived for the past two years, were also waiting outside.

I had expected this to have been a gruelling day, but in all truth this was not the case. In fact, it was a strangely pleasant day. The service, in an ecumenical chapel, was short and sweet. Dad had always said he didn’t want flowers or mourners dressed in black, or even much fuss. He’d wanted people to smile.

The pastor read several prayers and Psalm 23 (“The Lord is my shepherd…”), then read a brief tribute to my father’s life – his two years of National Service when he was stationed in West Ireland, drove a tank and ran the camp cinema; his working life as an HGV driver and the heart attack which terminated his career when he was sixty; his family life, being the father of five:- Eric, Evelyn, Melanie, Hazel and me; his being the grandfather of Victoria, Catherine, Alexander and Christopher; and then his struggles with deteriorating health. The pastor also read aloud a short poem which my mother Agnes had written, before reciting more prayers as the curtains silently closed, veiling my father’s coffin from view.

Then we were shaking the pastor’s hand as we filed out of the chapel and into the cold sunshine, and thanking various people for unexpectedly being there. Mum invited everyone to attend the buffet which awaited us all back at her house.

The buffet was a great success, actually. Our family is scattered across the globe and rarely meets up. Those who attended this gathering made it as pleasant an event as a funeral could be – which is exactly what my father had always insisted he’d wanted.
Posted by Adele Cosgrove-Bray at 12:09 pm

Email ThisBlogThis!Share to TwitterShare to FacebookShare to Pinterest
Labels: family