Word is They Say event, and Ballet 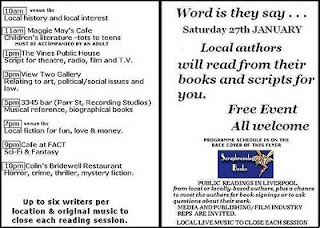 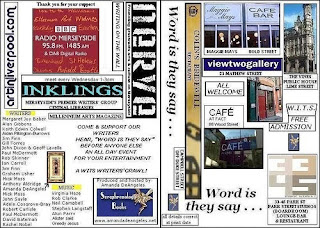 “Taste this,” he said, poking the thin drizzle of sauce zigzagging over his plate. He did not look happy.

“What’s yours like?” He peered across the table, over the top of the tea pot.

I scowled at the ugly square white plate sat before me, on which rested a thin, sunken floppy brown wedge. “Stale chocolate cake softened with cheap diluted sherry then warmed up.” I, too, had been presented with a miserable whisker of zigzagging cream.

Look, chefs, if I order pudding I want pudding, and not someone else’s idea of a break in an anorexic’s diet, ok? And what’s with the miserly drizzles? Humph!

The main meal had been pleasant but the portions meagre. I’d had to paddle through my korma to find any chicken, and I’d seen bigger stock cubes than his salmon steak. To top this, the place possessed all the aesthetic charm of a school dining hall – think N-O-I-S-E plus a constant flow of people pushing past us.

So, having grown tired of shouting at each other across the table in order to hear our conversation, we went somewhere much louder instead! *chuckles* It had been quite some time since I was last in The Swan Inn on Wood Street, Liverpool, but it’s not changed much – a few different pictures on the walls, and they’ve improved the restrooms, (cue dodgy accent impersonation –“Oh maa gaaaad, I’m sounding so American already!”) So we perched on familiar wonky wooden stools while happily being deafened by Van Halen and Free and the likes. Clearly it’s the same jukebox, except with a few Marilyn Manson and growly-stuff updates.

Anyhooow, shortly before 9pm we strolled next-door to the FACT Café, which was to be the venue for the Word Is They Say (WITS) literary event. The café forms one part of a much larger cinema complex, or so I gathered. It’s very spacious and modern and echoing; all hard flat shiny surfaces – but they make a fine cappuccino. Well, it has to be said that the turn-out wasn’t great, but those who had come along seemed to enjoy themselves. Certainly no-one wandered off – always a good sign!

The performances began with four folk/blues songs by Rob Clarke, who accompanied himself on an acoustic guitar. Following this came readings by several writers, including Aidan Pilkington-Burrows, Paul McDermott, Robert Carlisle, David Bateman and organiser Amanda DeAngeles. (That’s possibly not the full list, but being more interested in listening than playing good journo, I forgot to take notes.) Oh, and I went on fourth, when I read aloud the first chapter of Tamsin.

Monday night saw us at the Empire Theatre in Liverpool for a performance of Swan Lake by the Russian Classical Ballet Theatre. The role of Odette/Odile was danced by Nadezhda Schepachiova. Odette was danced well, but Odile needed much more vivacity than it was given. It is the contrast of characters which gives this twin role its purpose. Vladimir Statnii as Prince Siegfried and Ghenadii Badika as Baron von Rothbart also needed more power in their movements, though otherwise they danced elegantly. Evghenii Tkach as the court jester performed some delightfully controlled athletic jumps.

The corps de ballet was, unfortunately, weak. The spectacle of the swans’ dances relies heavily on the perfection of timing, of the exact synchronicity of all the dancers' movements. This was sloppy.  And don’t tell me this can’t be done – I’ve seen it done!

Also, I don’t expect to twice see dancers narrowly avoid collision, or to have to scuttle quickly into the correct alignment. Perhaps they were used to a different size of stage. Certainly the orchestra’s own sense of rhythm would not have helped the dancers; the pace of the Neapolitan Dance went completely haywire. To the dancers’ credit, they managed to maintain dignity.

In ballet, it is not enough to move fluidly with lyrical gestures. Energy, power and emotional expression are also required. Swan Lake devoid of real passion was a sadly lacklustre affair.

And per-leeze ditch the duck on a scateboard which trundled across the rear of the stage....!
Posted by Adele Cosgrove-Bray at 12:15 pm