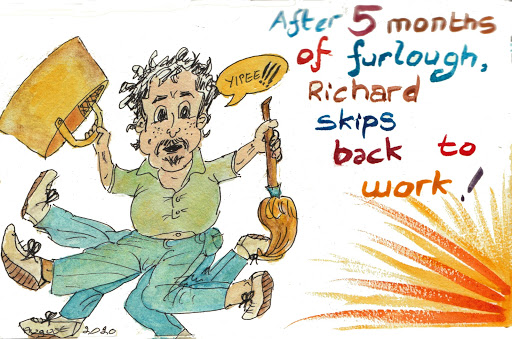 So off he goes, back to work after five months of furlough. Am I awful for being a little envious of his prolonged paid holiday? While hubby's been contentedly lounging on the couch, indulging in reading novels and marathon film-watching sessions, I've been melting under itchy PPE and helping to look after people made ill by COVID 19. Some didn't pull through.

Each day I'd think,"Is this the day I contract the virus? Will I carry it home to Richard?" His health conditions make him more vulnerable to infection. It has been stressful and mentally exhausting, and yet I've had it easy when compared to the experiences of hospital staff on the designated COVID wards.

The place where I work part-time is now free of corona virus/COVID 19. Will we get a second wave?  Your guess is as good as mine, as only time will tell.

Meanwhile, I keep seeing idiots on social media spreading nonsense which implies COVID 19 is a myth and that its dangers have been exaggerated. According to them, the bleak trials of the last months were a figment of health workers' imaginations. What an insult to health workers of all kinds, and also to all the other key workers who've kept this country ticking over while other people have rested safely at home. I wish these conspiracy theorists would stick to chattering about the yeti, Nessie and the likelihood of Lestat being real. (Actually, these can be fun topics....) 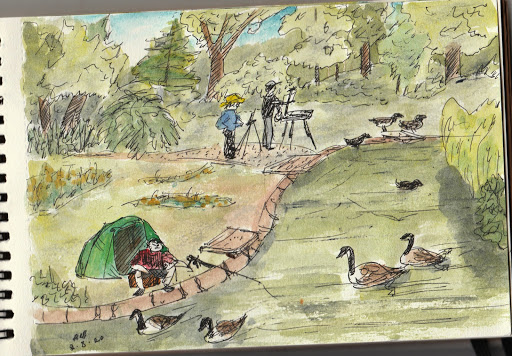 Here's one of my recent sketches, part of the on-going Birkenhead Park series which is now into it's fourth year. It's about time I did some more "proper" paintings for this project, isn't it! So far, I've got heaps of A4 and A5 sketches in sketchbooks, mostly done in ink or pencil, and with more recent ones with loose washes of watercolour on top of these. There's an oil painting still on my easel, currently about three-quarters done - no title yet, though Tree #3 is a possibility, (imaginative, hmm?). I haven't done many paintings this year, so far, simply because I've been too tired after work. 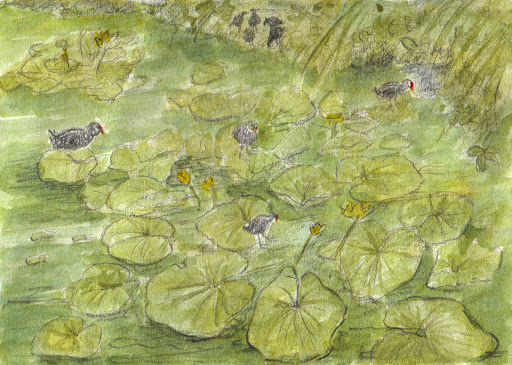 This watercolour and graphite sketch shows a family of moorhens daintily exploring waterlily leaves, while sunbathing on the banks of the pond are a cluster of newly-hatched moorhen chicks. This one's from Birkenhead Park, too, drawn with the sketchpad held in the same wobbling hand which was hanging onto two dogs' leads to keep them from the edge of the floating wooden jetty. Neither dog swims by choice; they'll paddle up to their ankles then run for dry land. However, they seemed to think the swarms of wriggling jacksharps looked worthy of investigation. 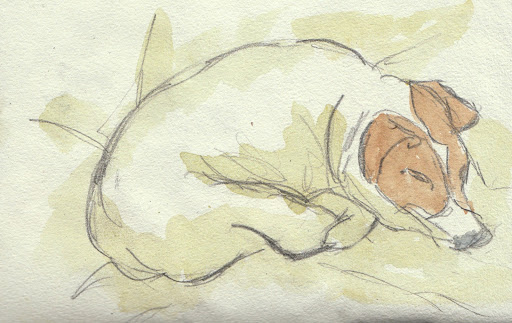 Emily is feeling her age now. She'll be fourteen years old by November. Her once-brown face is liberally sprinkled with white fur, and she's happier with short walks now. Even then, she likes to rest on a bench and watch the world go by. Her appetite is okay, and she's still the affectionate and mischievous scamp that she's always been. But this last week she's developed a slight wobble, as if she has dizzy spells. Apparently this is quite a common thing in older dogs and is something to do with the inner-ear. She's in no distress at all, but obviously we'll keep an eye on her.

Earlier this year Richard delightedly cried, "An earwig! I've not seen them for decades!" Now we have a massive colony of the (ahem) dear little things who keep creeping under our kitchen door after the dogs' dinner. So now as soon as the dogs have finished eating, once it's time to do the washing up after our evening meal, any scraps get bunged onto the patio - which the neighbour's cats are enjoying - and the invasion has decreased but not ceased. Try vinegar, advised the internet, so we poured vinegar into the door sill to create an acid moat. Our kitchen now reeks like an over-enthusiastic chippy, and the earwigs happily swim through it anyway.

Richard's cries on spying more earwigs have changed somewhat. To a casual on looker, he might seem to have taken up Irish folk dancing.

Posted by Adele Cosgrove-Bray at 5:06 pm