Continuing this excursion down Memory Lane to my art school days oodles of years ago, I'll now share the second batch of my work which captured my fellow students. The charcoal study on rough grey paper is of Charlotte, whose surname I can't remember. I do recall her fondness for boldly-coloured stripy tights, though, which she usually wore with Doc Martin boots.

This economical grey sugar paper was routinely used during drawing classes. If I recall rightly, we students were charged only 2p per A2-size sheet, which was a large part of its attraction. (This was some 30 years ago, remember!)

This was a group drawing project set by one of the college tutors, Ian Cameron, who asked us to draw the lamp and imply weight and shadow by use of line only. So I'd drawn this boring lamp, which floated in the middle of a sheet of white paper. What else could I do with the lamp drawing, other than twiddle my thumbs for the remaining thirty minutes of this exercise? No matter what, that lamp drawing wasn't going to get any less boring. Or was it? Jim was sitting directly opposite me, busily working away at his own attempt. So he ended up in my drawing. It's not a great portrait by any means, but the memory makes me smile.

Jim went on to study sculpture at Sheffield (?), and still produces art today.

There were two twin sisters doing the course, one with very short ginger hair and the other with cascading dark hair. Was one of them named Claire? I can't remember now, unfortunately.  Usually they were just referred to as The Twins. I think they went on to study Fashion and Textiles.

Tony loved art school so much he came back as a tutor and stayed for decades. This year his work based on Saint Sebastian was exhibited in London, and he is a co-founder and tutor at the Liverpool Independent Art School at 1 Rose Lane, Allerton in south Liverpool. This charcoal drawing came from a session when the life model had failed to arrive and so we students took turns to pose for each other.

I still have several pieces from this session, usually stored in an A1-size PVC portfolio case bought for art school but rarely used for anything other than storage due to its weight and cumbersome size which made it a royal pain to struggle onto buses then haul up the long stone staircase to the top floor art studios on college. When we students were required to present our portfolios for assessments, then this case had to be used. Still, it's still in use now for storing my old student work. 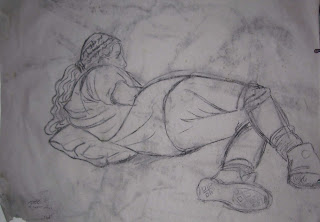 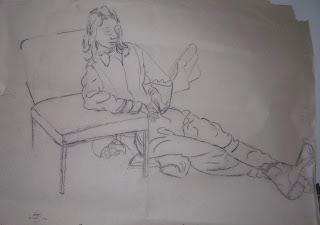 These two charcoal drawings were both done on 18th September 1991, but I can't recall the names of either of these students.

Angie, (surname unknown), was one of the two life models regularly employed by the college. This was an informal study of her, possibly on a day when the heating was so poor that the usual life drawing session had to be re-thought.

I include this last one even though it's not a particularly good life drawing, but because it completes my theme of sharing drawings of fellow students. In the corner, at an easel, you can see Dave McKay busily working away. While he was a student, he had a part time job as a security guard in St George's Hall, and routinely played his choice of music in the shared art studio rooms - Midnight Oil and Ministry were seemingly his favourites.
Posted by Adele Cosgrove-Bray at 11:29 am