In this blog post I'll be sharing sketches and drawings dating from around 30 years ago when I was an art student at City College, Clarence Street in Liverpool. The old building we used then has been demolished and replaced with something new. Did it need replacing? Well, probably. Or maybe an extensive renovation would have been adequate to make the premises meet modern health and safety regulations. It's a shame that the lovely old stone staircase with its ornate cast iron railings was consigned to history, though.

The lofty painting studios on the top floor, where we Fine Art students were installed, had a distinct character of its own, too, its wooden floors being patterned by layered splatters of paint accrued over the long decades of its use. A strong aroma of turps and linseed oil, coffee, incense and, occasionally, wet coats, filled the air - which was usually fractured by Dave McKay's death/industrial metal tracks.

The majority of these sketches were done quite quickly, sometimes when people weren't even aware they were being sketched. (I still do this!) Some are in sketchbooks, others are on loose sheets of paper, others are stored in a display binder, and a variety of media has been used, including pencil, felt pen, ink pen and watercolours. There are too many of them for one post, so I'll split this subject into two parts.

This one's faked! While the setting is based on the studio rooms were we worked, the seated figure wasn't an art student but a friend from that era, Shari Green. What amused me was the note pinned to the wall: "Tell Colin I've gone to Rennies..." This refers to tutor Colin Bennett, and Rennies remains one of Liverpool's most popular art supplies shops. The electric fire was the sole source of heating in the awful flat in Aigburth where I lived at that time. 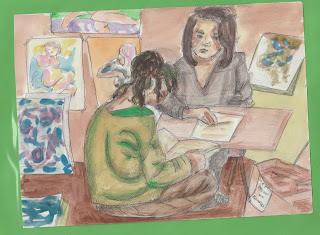 The date of this sketch is unknown but it's from the same era. I forget the names of the two students who I drew as they worked; one of them travelled to college from her home in Runcorn every day. This was drawn in the room where we students worked, on the top floor of the Victorian building which you can see in the photo above. The college owned both the old building and the 1960's one immediately next to it.

Neither of these are dated. Sharon lived in Childwall with her family, and she was known for her elaborate goth style. The ballet shoes in this sketch were probably an invention of my own as I don't recall her actually wearing these. We went clubbing together a few times, but unfortunately lost touch after she moved to Nottingham to study fashion design.

Surnames have been lost to the mists of time, but I recall Paul talking about an earlier period of his life when he'd been an Augustinian monk. Or was it a different order? I'm unsure now. He once came to college wearing his religious habit.  A pleasant guy, actually. I think Sonia dropped out in the first year due to child care issues.

I'd love to know what Claire Bleasdale is doing now. She went on to study at Glasgow School of Art. We enjoyed visiting galleries and exhibitions together even though our opinions were poles apart. David Montoute wanted to be an illustrator, but I've no idea what became of his ambition.

Claire Suttle went on to study textiles - in Preston, perhaps? She had gorgeous hair, a great mop of bright auburn curls.

I have no recollection of the Time project mentioned in the above sketch; I can only assume it was a class project of some sort. Here you've got a study of Heather while she was drawing/painting, and a life study of Billy (surname unknown) who was one of the two models employed by the college. There's an outline of a guitar next to some stylised tree trunks, and a sort-of Egyptian in the foreground. There's also a steer's head and a beef burger. Hmmm...!!

This sketch of Jasper, (surname unknown), was done in three minutes, in brown felt pen. I suspect it was part of a life drawing class when the model had failed to show up, and so students took it in turns to pose for the group. The sketch of Kerry below is similar, but was given ten minutes.

One interesting thing, to me, is that the act of rooting out this work from my ancient and increasingly rusty portfolio cases has been the realisation that I enjoyed sketching people, especially when they're not deliberately posing, even back then. I continue sketch people in this way regularly, in my local park especially.

Anyway, I hope you enjoyed browsing through these old remnants of my art school days. Part Two of this little series will be along in a few days.
Posted by Adele Cosgrove-Bray at 10:35 am