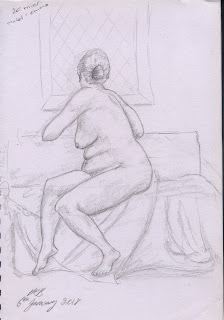 Since 2012, I've created a list of annual goals which I aim to achieve during the next twelve months.  This is one way to keep track of the progress of various projects, and it's a bit of self-entertainment.

These were my goals for 2017:-
Well, the first two goals weren't met at all!   I wrote only three short stories and four poems, which is a spectacularly lousy output.  However, the reason for this is my focus on #3, ( and #4), and progress with Morgan is doing very well.  Will it be finished in 2018?  Here's hoping, as I've been playing around with an idea for another novel for some time already, which explores the subject of reincarnation, karma and soul growth.  It will be a stand-alone novel; in fact Morgan will probably be the last in the Artisan-Sorcerer series. 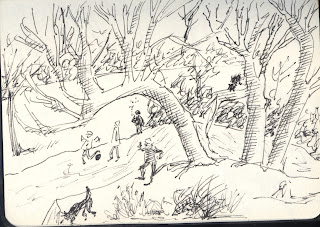 #4:  Throughout 2017 I was sketching in Birkenhead Park again.  If you scroll down this page, or use the menu to go to the Art page, you can watch a video slideshow of these sketches, plus previous years' work.  I've finally begun the first in a planned series of oil and watercolour paintings in this theme.  Watch this blog for progress reports!

Why Birkenhead Park?  I often walk my dogs there, and it proved too tempting not to start carrying a small sketchbook in my pocket. That's all anyone needs in order to to go sketching:  a pad and a pen or pencil.

The park is an important green space in a heavily built-up area, and offers a range of subjects for any painter - woodland copses, ponds, wildlife, buildings, bridges, meadows...  The sketches tend to be done very quickly out of necessity, as people and wildlife move continually.  Some of my sketches of people look more like cartoons, probably due to the rapid speed that they're drawn at.

I find myself attracted by the shapes of old trees, and will continue to sketch their twisted, arching, gnarled forms.  Winter's great for this as their shapes aren't hidden behind foliage, but then summery leaf coverage brings another whole range of shapes and tones to explore.

I've done quite a bit of photography around the park, too, and I plan to use my photos in conjunction with sketches.   I use photography as a reference but don't reproduce "reality" exactly as I'm more interested by impression, atmosphere and the effects of light.

Incidentally, I did keep my 2017 goal of taking up swimming again, which is something I enjoy.  However, after around six months I cancelled my membership due to the unsatisfactory hygiene conditions of the facility. 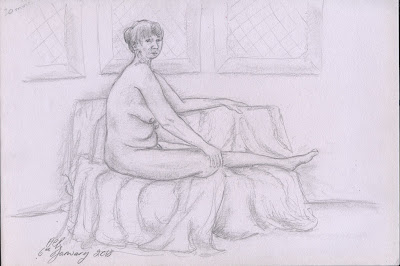 Posted by Adele Cosgrove-Bray at 10:47 am

It is the best time to make some plans for the future and it is time to
be happy. I've read this post and if I could I desire to suggest you few
interesting things or tips. Maybe you can write next articles referring to this article.
I wish to read more things about it!

Anyone is welcome to leave their suggestions and comments here. Thanks for dropping by.