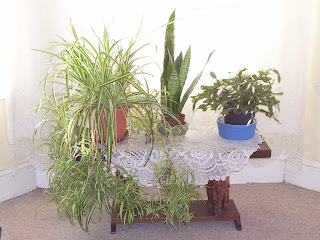 I thought I'd show off this amazing spider plant. I bought it about four years ago as a tiny thing with only a few spindly leaves, for the grand total of 50p.  It obviously likes this sunny spot by a bay window.

The elephant table is African, made from mahogany.  I bought that around 1986/7, from a vintage furniture store on Aigburth Road not long after I moved into my little flat near to Lark Lane, which is just off Aigburth Road.  The elephants used to have tiny tusks but my cat Rhiannon kept chewing them, and as they were already loose I removed them in case they got stuck in her throat and caused injury.

I hope you like the music, which I think suits the series well and brings to mind Bethany Rose's story especially.  Her story will continue with the forthcoming 5th novel which I'm currently writing the first draft of.  Will this be the last in the series?  Maybe.  I've been toying with an idea for a stand-alone novel in three distinct parts, with a theme of reincarnation for some time.  Anyway, meanwhile here's the new trailer.  Enjoy! 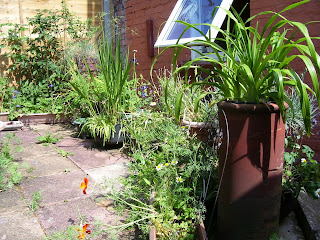 We've enjoyed a heatwave here for the last two days.  As I type this, the sky is clouding over and the air feels like a thunderstorm's brewing.  A good downpour will save me from having to water my patio pots.  You can see some of them here in this photo.  Things aren't in full bloom yet, for the most part, but there are self-seeded purple and darker-purple aquilegia and yellow and orange poppies between the paving stones, and the yellow roses are in bloom now.

Richard planted two new roses, and I've added thyme, rosemary, chives, hibiscus, a purple-flowery thing whose name I've forgotten, and a raspberry cane which I planted in a large green pot.  The strawberry plants have their first flower, and we've discovered that the Horrible Thorny Bush is a gooseberry bush, so as it's useful it can stay. 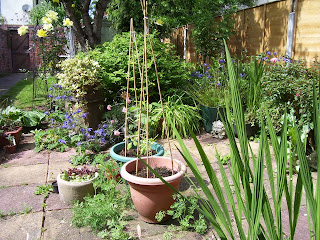 What won't be staying is a rose of unknown species, which for the second summer running has failed to produce any buds.  What's the use of a rose without flowers?  I've never even heard of this before.  Maybe it's just too old now?  Come autumn, it's ear-marked for being dug up.

The fuscia is heavy with buds, and last weekend I pruned the forsythia now it has finished flowering.  When we moved in two years ago, it had been left to grow into a very tall, wispy mess.  Now it's starting to bulk out nicely, and had a great show of yellow blooms this year. 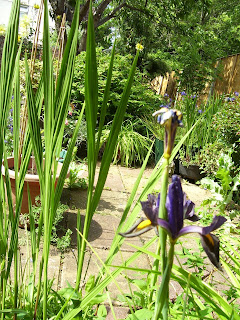 The purple and yellow iris are lovely at the moment.  I'd like to have more in the garden.   In Birkenhead Park, the flag iris edging the ponds look gorgeous.  I'll keep that in mind for when I eventually get time to dig a small pond in our garden.

I read an interesting novel based on factual accounts of hopping.  No, not jumping around on one leg.  This book, by Melanie McGrath, describes the life of a desperately poor East End of London family who, like many others from that area, supplemented their income by picking hops in Kent.  The story is set before, during and after WWII, and is more a story about people than the hopping process itself.

I happened to mention Hopping to an elderly lady who'd been raised in the East End, and she immediately smiled and said her family never went hopping because her father considered them too posh for that, even though they too were quite poor at that time.  However, she did know of many other families who relied on hopping.

Another great read is The Small Hand by Susan Hill, a prolific author of over 50 novels.  It's more of a novella, really, but tells a convincing ghost story with a clever twist at the end, and is so well crafted that the narrative flows beautifully.

Another prolific author whose work I've only recently encountered is Nora Roberts, whose trilogy consisting of Blood Brothers, The Hollow and The Pagan Stone I enjoyed for its grounding in realism.  The characters read like people you might meet and know.  The only mild grumble I had was that the "pagan stone" itself didn't have a more antique-sounding name, but that's a minor quibble.

If a man had had 50+ of his novels published, his name would be trumpeted across the Western world.  Not so for women, it seems.  But aren't we women also guilty of helping to continue this bias for male-created work?  Opinions welcome, of course.
Posted by Adele Cosgrove-Bray at 4:38 pm

Thanks a lot for sharing this wonderful post with us which is quite innovative and informative to the readers and I am hoping to see more interesting posts from your side so keep sharing.
Street Style