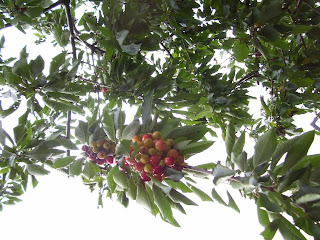 We're still waiting for a bloke to fix our boiler.  It went off and wouldn't relight, which it's done a few times before - something to do with water pressure dropping inside the boiler, which can be fixed by twiddling a button which usually doesn't do a bloomin' thing, (apart from when the bloke twiddles it, when it behaves instantly).

So this time he had a proper look at it, and got it working temporarily while he ordered a valve which he said was missing. It worked for a day then conked out again.

He put the valve on and it was supposed to be fixed. "But it might leak a bit," he said. I got home from work, went to see what he'd done, and ran for a bucket. So we called him back. "Oh, there're two washers missing," he said, only they come in bags of fifteen, "so you'll have a lot of spares." Ha ha ha. So now we're still waiting for a bag of washers to arrive at his suppliers, (does he mean via eBay?!!), and the bucket's still in use. It's only a tiny drip now but enough to soak the floorboards if left.  And still no hot water....!! Thankfully our shower's heated independently.

Anyway, here's a photo of our cherry tree (above), laden with fruit which we harvested before the local bird population could devour the lot. There're plenty left for the birds at the top of the tree which our ladder couldn't reach. Richard made cherry and rhubarb crumble - the rhubarb's grown in our little garden too.

I was amused by a magpie doing its utmost to steal a shiny solar powered lamp - which doesn't work anymore - which dangles from the top of a clematis arch. The magpie pulled and tugged it this way and that, trying with all its strength to break the wire holding the lamp onto the arch. It even managed to wrench the lamp upside down, but still failed to snag its prize. This went on for about ten minutes before it flew off in a huff, squawking in frustration.

Posted by Adele Cosgrove-Bray at 11:34 am

Email ThisBlogThis!Share to TwitterShare to FacebookShare to Pinterest
Labels: gardening