I bought a packet of Polo Mints.  They cost me 65p.  Richard said it's no wonder that so many newsagents are going out of business as Home And Bargain sell the same mints at three tubes for £1.  I pointed out that to get to the nearest Home And Bargain store I'd have to do a thirty-five minute journey into Birkenhead, which isn't much use when I'm on my way to work in the exact opposite direction, and it would cost me far more on transport to Birkenhead than I'd save by buying mints there.  It's not as if I'm a frequent mint eater - which is why I was surprised by them costing 65p. 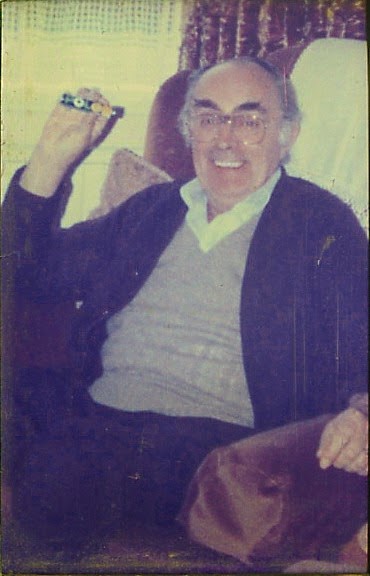 I can remember when Polo Mints cost 7p.  The reason I can remember this riveting bit of social history is because many years ago, when I was a very small child, I had bought a Christmas present for everyone except for Dad.  Over breakfast, I asked him what he'd like.  "How much pocket money have you got left?" he asked.  I replied that I had 7p left.  With his brown eyes twinkling, he said, "What I'd like more than anything is a packet of Polo Mints.  They cost 7p."

And so began a long-standing joke between him and me, which had me hiding Polo Mints in his slippers or under his pillow whenever I'd visit.  Every birthday or Christmas gift had numerous tubes of these mints hidden somewhere within them.  Once, I taped loads of them together to make a steering wheel - as Dad was a lorry driver - and when I arrived for dinner he opened the door wearing it around his neck.

Dad died on 2nd February 2007.  He'd had a long and cruel battle with Parkinson's and Alzheimer's diseases.

Speaking of battles, earlier this week I was upstairs putting clean laundry away when Richard shrieked, "Adele, HEEEEELLLLP!!!  Bring the First Aid kit!  QUIIIIIICK!!!"  So I dropped what I was doing and grabbed the required box of tricks from the bathroom, then headed downstairs to find Richard with blood pouring down his arm.  His hand was under the cold tap which was splattering blood everywhere.  He was hopping around like a mad man, wailing in pain and sprinkling blood even further.  "You're a nurse," he yelled, "SO DO SOMETHING!"

I am not a nurse.  I have never been a nurse.  I did a one-day First Aid course with the Red Cross four years ago but that is hardly the same thing.

Anyway, I pulled his hand from under the tap - running water would prevent coagulation - and saw he had an inch-long cut along his finger, close to the nail, and I wrapped this in a wad of clean kitchen paper and applied pressure.   "OOOWWWWWWW that jolly hurts!" he said, or words to that effect.  There was blood over the sink, smeared across the worktops, sprayed up the white kitchen walls, and one of our Jack Russells was eagerly gulping down blood on the floor tiles.

At that precise moment, the doorbell rang.

And there was another smiling couple, prospective house buyers, who'd come to have a look round.  So I stuck on my professional smile and said, "Do come in.  Would you like to take a look around the garden first before it gets too dark?"  Meanwhile I was silently willing them:  "Everything normal here, folks.  Nothing to see...!"    Maybe I did too good a job, as they didn't seem to see much likable about the house.  Hey-ho.  Onwards.
Posted by Adele Cosgrove-Bray at 2:28 pm

Hello, i think that i saw you visited my web site
thus i got here to go back the choose?.I am trying to in finding things to enhance
my site!I suppose its ok to make use of some of your ideas!!

No, it's not ok to use my ideas. The blog posts and photography on this website are my legal property and are protected by Copyright.

I've never heard of your website so, no, I didn't visit it. I wish you progress in developing your own ideas.