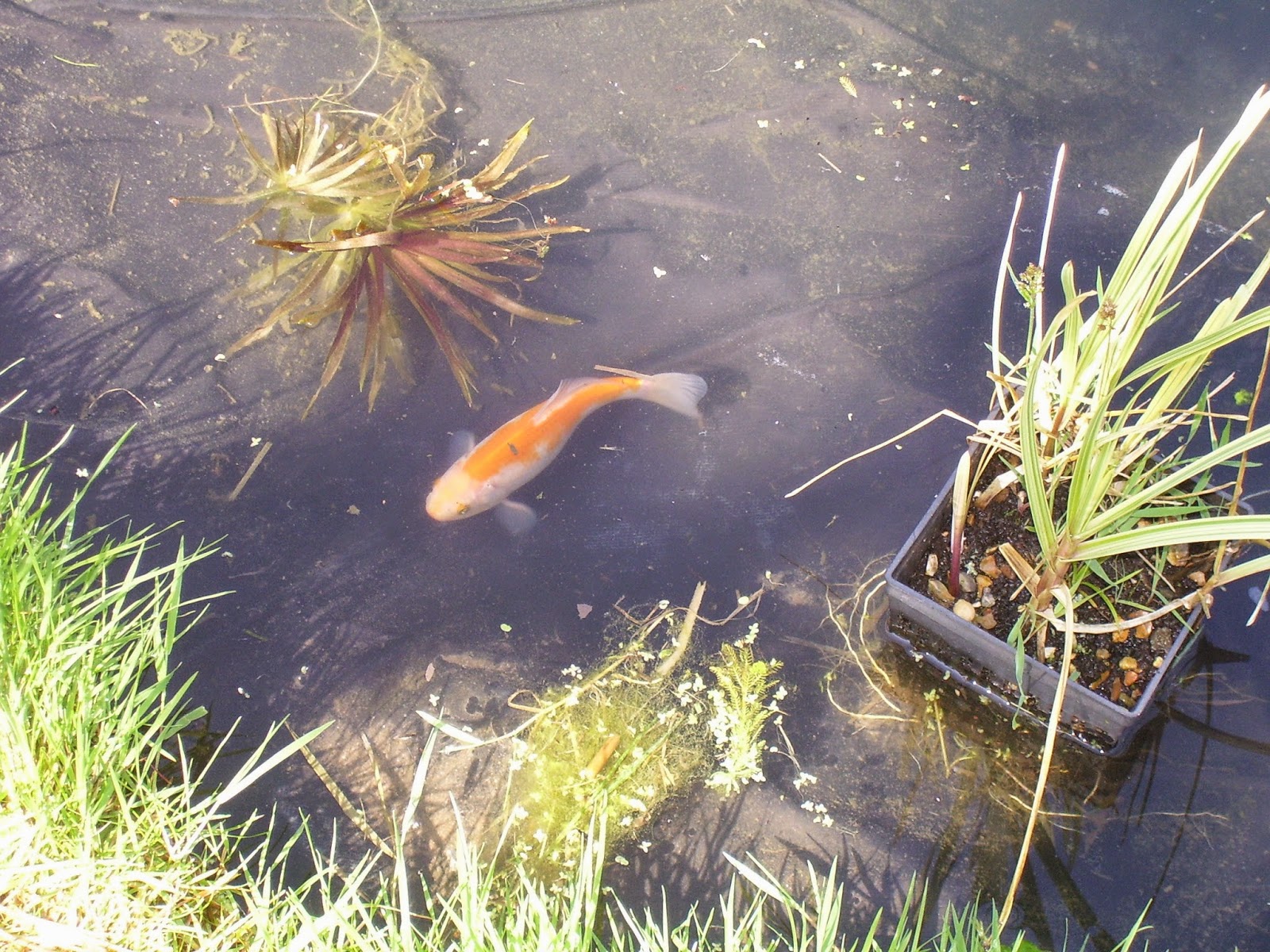 I have finally got on with the job of cleaning out the pond.  The water desperately needed changing as it was quite murky and poor Marie Celeste, our sole surviving goldfish, was visible only as a vague flash of colour.  She - or is she a he, as if it even matters? - seems much happier now swimming doesn't involve the risk of crashing into stuff in the dark.

All but two of my lovely water soldiers have vanished.  Maybe the algae problem blocked out too much light and so they perished?  They're one of my favourite pond plants.  They simply float around, sinking if light's poor and rising again on sunny days.  Well, they can when a blanket of green gloop isn't blocking their way.

The gloop has been consigned to the compost bin, and 100% fresh water is in the pond now - but this also meant many of the damselfly larvae would have been killed.  I managed to save some of them at least, and I hope they survive the change of water. I've added a bunch of barley straw, as this is supposed to be an organic way of combating algae.  The main cause of algae in my pond is probably due to not having enough plants in it.  Between 60% and 75% of a pond's surface is supposed to be covered by aquatic plants. 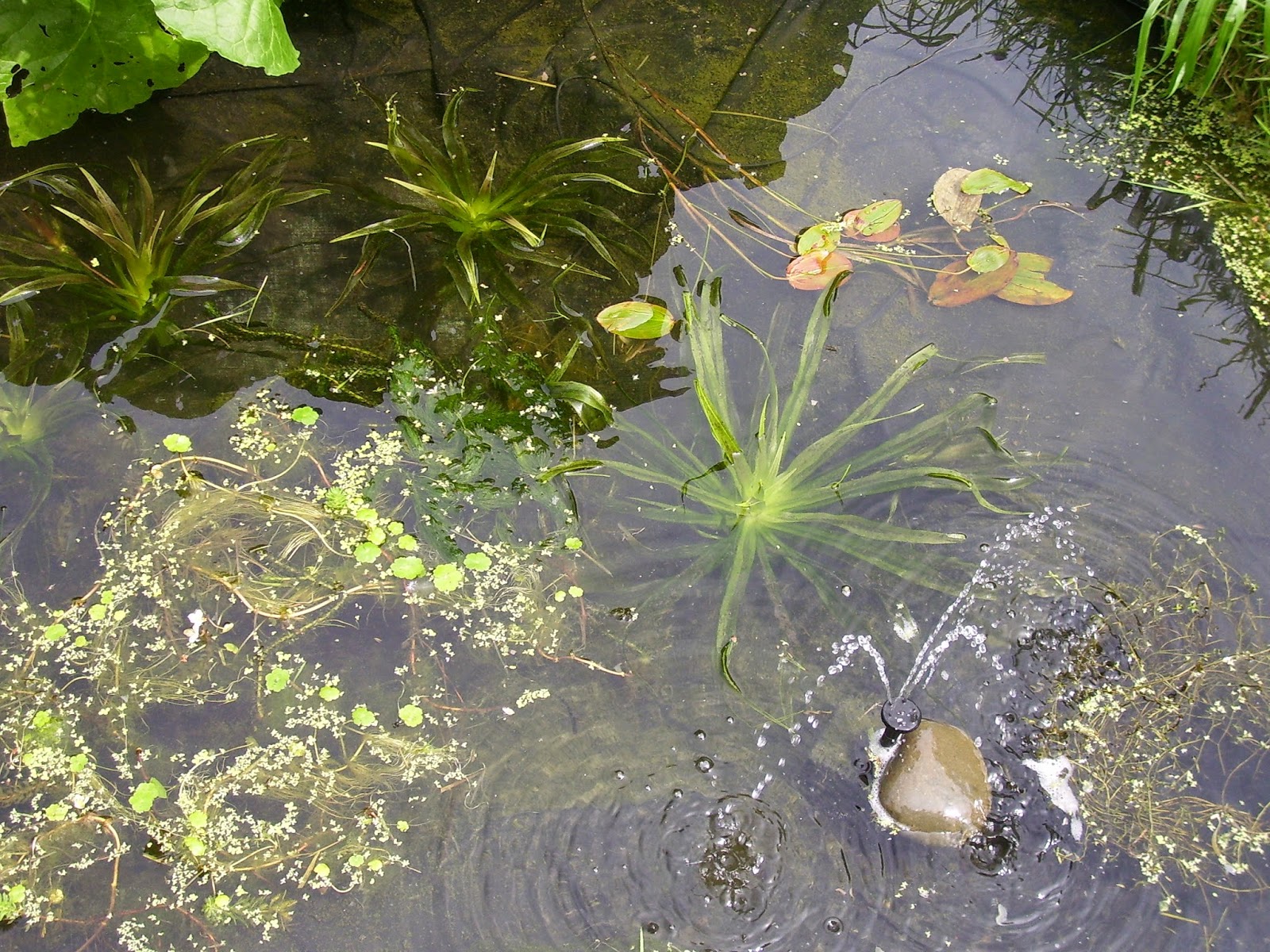 Aquatic plants in their new home.

On the subject of water still, just this morning I finished reading Helen Dunmore's Stormswept, which is the first of a new cycle of her Ingo Chronicles.  Aimed primarily at children, it's really for kids of all ages.  (Ahem!)  The reader is swiftly transported into an enchanting world of Cornish mer folk, swimming under the ocean to share their mysterious world.  The elements of fantasy are grounded skillfully with the everyday life of a quite ordinary human family, whose characters are entirely convincing, and the pace is designed to keep those pages turning.  As always, Dunmore's prose is poetic and polished - not as literary as her books for adults, but a pleasure all the same.  Having come across her work a couple of years ago, I've come to really admire her writing style.  The book cover is lovely, too.  I was left wanting more Ingo stories!

I have now completed the NCFE Level 2 course in Business and Administration, and the last of that has been mailed of to my tutor at Stoke-on-Trent College.  Now I have to wait for feedback from my tutor and  to learn if I've passed, then wait for the certificate.  I'm sceptical as to the real value of the course.  While it is an accredited course, it was so basic a school-leaver could have tackled it with ease - never mind someone who's co-run a business for the last twenty years!  Anyway, I have shelved plans for further courses until I've finished writing Fabian.  There are only around 15,000 words to go, so I'm now heading towards the last lap.  I feel that completing Fabian is more important than starting another of-dubious-value course right now.
Posted by Adele Cosgrove-Bray at 12:41 pm