Last summer, I made a frog pond in our garden.  The very short video above shows the tadpoles which are currently swimming around, obviously enjoying the warmth which the spring sunshine is bringing to the shallows where they like to congregate.  They're quite fascinating to watch.  As soon as I get home from my day-job, I put the kettle on, let the dogs into the garden then visit my pond to see how the taddies are growing.  Right now they're making short work of a slug which drowned itself.  Ok, so that is a bit gross - but that's nature for you, red in fang and claw....

Today I added another doll to my collection, one I've wanted for absolutely ages:  Daisy, which was designed by Mary Quant.  As a child I had Daisy and a friend of hers as paperdolls; goodness knows how many other paperdolls I had, hundreds at least.  Anyway, today I won an eBay auction for a Daisy, so I'll be looking forward to receiving that through the mail and adding her to my collection.  Mine is not a big collection - I saw a YouTube video earlier today which showed a massive collection of all kinds of dolls - Skipper, Monster High, BJDs, porcelain vintage dolls and Madam Alexander dolls, and others - collected by a mother and daughter.  "People come in and think we're weird," said the daughter, but she obviously didn't care two raspberries for their opinions and neither do I.  Some of my dolls have been with me for decades, but I only started collecting seriously last year.  I think they're cute and they make me smile - so if collecting dolls isn't your thing, just move along. 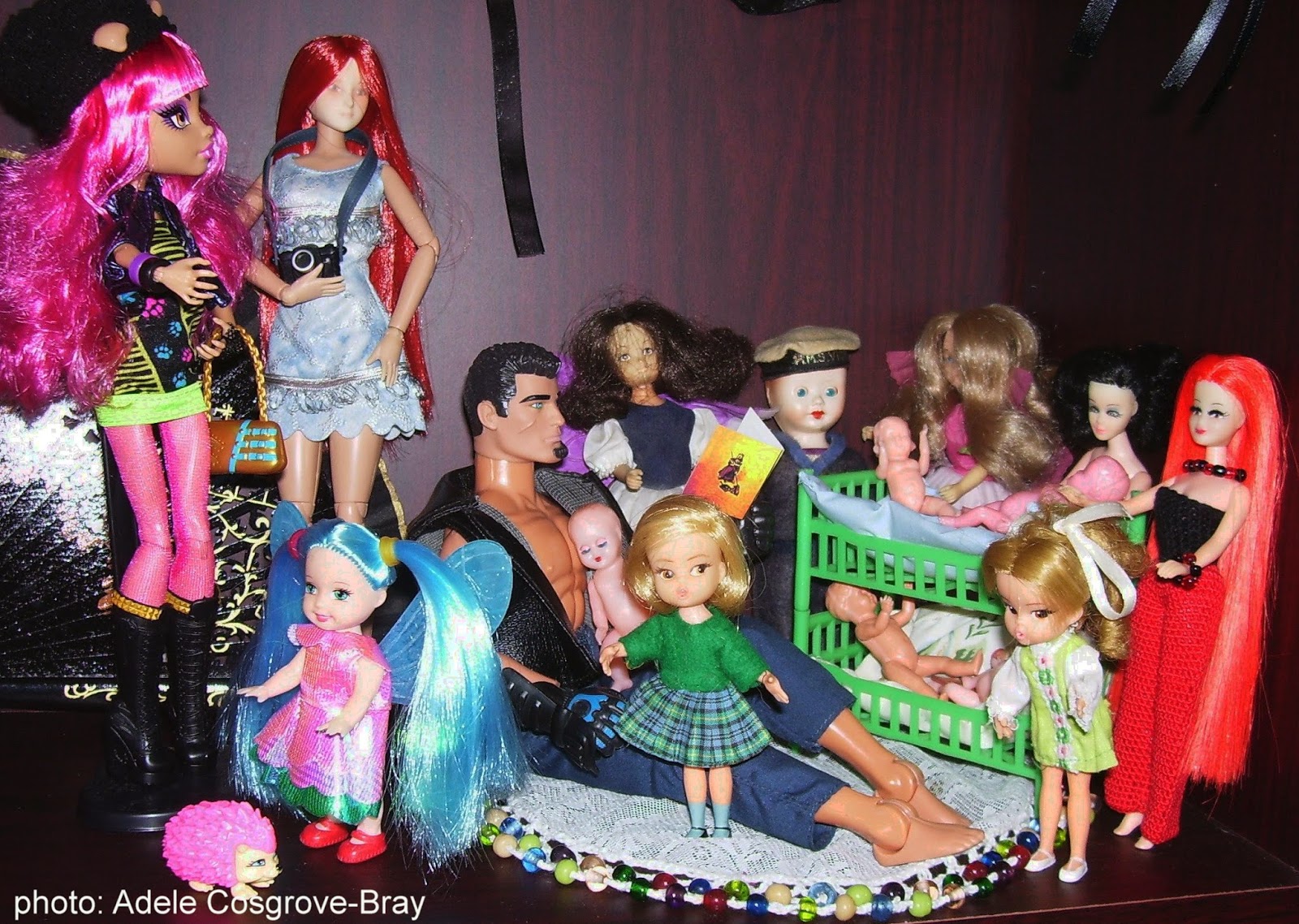 ﻿
This photo shows a pink-haired Monster High doll; an auburn-haired obitsu doll (my first attempt at a face-up!); a vintage Action Man (holding a miniature book); a Flower Fairy on either side of a ROGARK sailor doll; Tammy (?) and a OOAK re-rooted Pippa (who doesn't have a pale stripe in her hair, that's just caused by the flash off my camera); two Dolly Darlings and a blue-haired mystery doll.  The babies in the bunkbeds (Health & Safety would throw a fit!) are possibly from the late 1950's.

I've long held an interest in history and local history, and recently I was invited to join the Admin team for a new but surprisingly large and enthusiastic group called Hidden Wirral: Myths and Legends who are organising talks and guided tours for its members.  The project looks very interesting and a whole bevvy of events are being planned, so if you're local to Wirral, or can travel here fairly easily, take a look at the website.

And, yes, work on Fabian: An Artisan-Sorcerer Story proceeds...  I'd hoped to have had it finished by now.  And with that very aim in mind, I intend to cut down on the amount of time I spend on Facebook - as fun as that can be, keeping up with everyone's news and cute cat piccies, the novel has to take priority - especially I've several other writing deadlines approaching too.  I'll keep updating here, though.
Posted by Adele Cosgrove-Bray at 5:04 pm