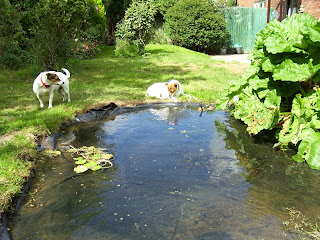 Emily and Poppi by the pond.
I received a lovely email from someone who had noticed I'd deleted my old LiveJournal blog.  He had enjoyed the philosophical debates which had unfolded there, and was disappointed that the blog was no more.  I hadn't updated my old LJ blog since opening this Blogger site so I was a little surprised at this, but we all like to be missed, hmm?
I'd like to reply properly to this person, but I accidentally deleted the email.
I've not blogged much on philosophical topics for some time, even though philosophy is a dominant part of my life.  Maybe I should?
Meanwhile, back at Maison Cosgrove-Bray, I've been busy creating a garden pond.  Earlier this year we were invaded by a huge number of baby frogs.  Apparently frogs don't reach maturity until they're five years old, and until their first mature spring season they don't spend much time in ponds.  However, we also have a small population of older frogs and toads - the old black toad who lives under the patio step is still with us - and so I have made a pond.  It wasn't done in a day, obviously.  The digging was spread over the better part of a week.  There are several levels to the pond structure, and I've added a few pond plants - fairy moss, pennywort, some depressed-looking baby water soldiers*, some grassy stuff (as the horticultural term goes!) and some white lysichitum camtschatcense**.  My brother Eric recommended I add a small number of goldfish in order to keep mosquito larvae from hatching into a blood-thirsty swarm.   And that's the story of the pond so far...and not a frog in pond sight.  Two water boatmen have moved in, though.
*When I queried the condition of the water soldiers with the aquatic plant company which I bought them from via eBay, I was told all baby water soldiers are limp and brownish, having spent all their time underwater.  Once they see sunlight they'll go green and perk up, and this can take up to three weeks.  I've had them for just over a week.  So far they're no worse, but they've not improved either.
**This is what it says on the label.  Maybe I should run a competition, along the lines of a free copy of one of my books to the first person who can pronounce this!  The flowers look similar to a calla lily's, but the stamens are green.
Writing-wise, I've been working on Fabian, and reading through submissions for the forthcoming free ebook, City Stories.  I've also written a few short stories which may find their way into the sequel for Dark Tides which will be called Dark Waters.
You're invited to read an interview with me, in which I talk about the Artisan-Sorcerer series, here on Smashwords.
﻿
Posted by Adele Cosgrove-Bray at 10:58 am

lysichitum camtschatcense - aka skunk cabbage - The plant is rich in calcium oxylate, this is toxic and if consumed makes the mouth and digestive tract feel as though hundreds of needles are being stuck into it. However, calcium oxylate is easily destroyed by thoroughly cooking or drying the plant.

Water soldier - Classified as Near Threatened in Britain on the Red Data List. on one site, on another, it is highly invasive! - http://wildflowerfinder.org.uk/Flowers/W/WaterSoldier/WaterSoldier.htm - take your choice!

White Skunk Cabbage is a lot easier to pronounce, that's for sure!

If any of the plants get too invasive, we have two hungry compost bins.