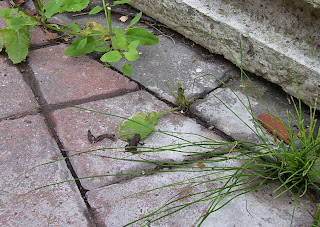 One of the tiny frogs currently in our garden.﻿

An army of tiny frogs has invaded our garden.  The photo above shows just one of them, sitting on our block-paved drive at the side of our house, which gives a good idea of just how small they truly are.  They're so cute!  We have to really watch where we're putting our feet, there're so many of them.  It's as well that we have no chickens at the moment, as the eggs would be so full of reassembled frog that the eggs would start hopping.

Our roses have been fabulous this year.  Not so our raspberries, which tasted vile and quickly went past their best.  My attempt at growing garlic ended in a shrivelled disaster, and I suspect that the sun has been too fierce for the shoots to thrive.  The rosemary cuttings have taken well to their new spot in the far border, however, and the broom looks ok too.  The big box of wild flower seeds that I sprinkled round the borders has produced various poppies and a smattering of white alyssum and that's the lot.  Oh well, it only cost 50p - and I love poppies anyway, so no loss there.

The apple tree has a heavy crop which isn't ready to harvest yet, for all this being Lughnasadh, but it's looking very promising.  The berries on our rowan tree are starting to turn red already, which seems a bit early.

Other news:  I'm still waiting to receive my NVQ Level 3 certificate in Customer Care, which relates to my day job.  I spoke to the college yesterday and was told it might take another two months before the document arrives, which seems crazy as I passed the course in April.  How hard can it be to print-off a certificate?   Open the computer file, fill in my details (name, date), hit the print button, place it in an envelope and mail it off.  That sounds easy to me.

I was interested to read about Stephen King and his family, which has five writers within in.  My brother Eric and one of my sisters, Hazel, are both writers.  One of Hazel's daughters, Catherine, writes fanfic and I hope she'll turn to something that is of her own creation soon. Hazel's other daughter, Vikkey, is turning into a skilled photographer - which is an interest shared by Richard and me; it's through photography that we first met.   My other sister, Evelyn, is married to Andy who sings around various clubs in the North West.  Uncle George plays a guitar.  If I remember rightly, Uncle Frank is a poet and musician. (If I seem vague, it's because he lives in Australia and if I ever met him, when I was a small child, then I can't recall it).   I've probably missed a few people out here....
Posted by Adele Cosgrove-Bray at 1:28 pm

Frank is also a carpenter and writer - he's had a few books published, mostly of his poetry, but also an off-beat life story/pub yarn! I very much doubt that you met him, as he went to Oz as a ten pound pom, in about 1960, along with John and Vera, and their partners..
I don't think any of your/our Mum's sisters ever did anything like this, and her only other brother John was taken by cancer a few years ago. I don't think he did anything either.

I can recall meeting Vera when she came over to England for a holiday, many years ago. Otherwise, I only know these people through Mum talking about them.