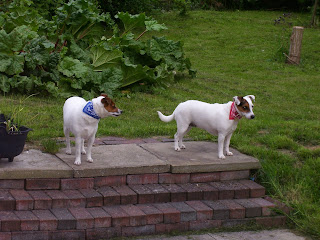 After a run of hot days, it's fair to declare that summer has finally arrived.  Not to worry, the solstice is less than two weeks away, and it's almost a tradition that it pours with rain then.

As can be seen in the photo, our rhubarb is growing well.  In the black tub, to one side of the photo, is a small crop of garlic which isn't doing so well - the spindly leaves look yellowy, so I am wondering if the sun's been too fierce for them.

This morning Richard and I went swimming again.  We're really getting into this, and had a lot of fun today.  I won the race!!!   There was only the two of us in the race, and he does have impaired breathing capacity...but it's the principle.  I won, I won!  This is also the first time in my entire life that I've ever won any race, come to think of it.  I was always hopeless at sports back in my school and college days - partly due to a total lack in interest in discovering who can run round in a big circle the fastest or jump over the highest stick.  I studied Shotokan Karate for a while, when I was aged around 16, and that was fun, but I could not summon any enthusiasm for playing hockey in weather so cold our legs would turn a bizarre reddish-purple.  Netball went over my head - literally, as most of the other students were taller than my 5' 1.5".

Anyway, back in the here and now, we've been having fun swimming.  The pool attracts quite a varied crowd, from parents with very young babies or toddlers, to the quite elderly - and some of these are by far the best swimmers of all the pool's users.  Last week, I watched a gentleman who must surely have been in his seventies, who swam length after length non-stop, gliding powerfully through the water with far more grace than I currently muster.  I'm still taking a break after each length, and needing it!  Still, I swam 26 lengths today, which is my 11th swim.  My record is 30, while Richard's is 20, but we'd both had enough.

Posted by Adele Cosgrove-Bray at 4:00 pm

Email ThisBlogThis!Share to TwitterShare to FacebookShare to Pinterest
Labels: health

Hi! Can you tell me when the next West Kirby Writers meeting is please?

No problem, Gavin - visitors are always welcome at Riverside Writers. We meet at 7.30pm, at West Kirby Library, Wirral, on June 24th.