Alice and the Piano

I filmed this on my Kodak EasyShare C340 camera on a grey and blustery but pleasant day earlier this week.  The place looks different again in summer, and with a different quality of light.  In the summer, when the beach is plastered with sun-worshippers, or when the marina is in use for various watersports, there's another atmosphere altogether.  But I like the place when it's nearly deserted...  Anyway, the video shows one of the locations from Rowan: An Artisan-Sorcerer Story, and it pans round to show Little Eye, Middle Eye and Hilbre Island which feature in several of my stories.  I don't suppose it really matters if a reader can view real-life footage of a place used in fiction but it can be fun all the same.  And besides, I enjoy tinkering with my camera. 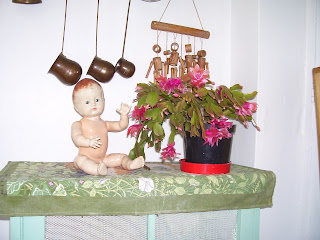 Meet Alice!  She's the newest addition to my small collection of dolls.  She was made by Pedigree sometime in the 1950's, which means she's classed as vintage rather than as an antique.  Her little orange flowery dress and headscarf were drying on the washing line outside when I took this photo.  Unfortunately her hand-knitted underwear and orange cardigan fell to bits even though I hand-washed them very carefully - they had several holes already and the lukewarm water turned the old wool into mush, for the most part.  I hope to replace these soon - can't have Alice getting cold, hmm?!!

She isn't named after Alice in Wonderland, by the way.  I might cause mass offence by the following remark, but even as a child I disliked the novel.  Even Johnny Depp couldn't change my mind, sorry!  She's named Alice after an elderly neighbour who lived over the road from us when I was aged around four or five.  My parents lived in Newton-le-Willows, in Lancashire, then.  I used to go on errands to the corner shop further down the seemingly-long avenue and bring back a loaf or a bottle of milk for her.  It earned me a bit of extra pocket money.  These-days, most parents would not allow so young a child to do something similar but there was a lot less traffic on suburban roads then - and also I think kids grew up faster.  For example, I was expected to walk myself to and from playgroup on weekdays, which entailed crossing several roads and passing through a narrow bridge which had no pedestrian space, and I was only four years old then!  Funny how most other children's parents came to collect them, though....

I've no idea how old Alice really was, but I can remember thinking she was probably the oldest person on Earth.  She wore her grey hair in a neat bun, and always wore ankle-length plain skirts with high-necked, long-sleeved blouses.  She was very refined, in a late-Victorian way, and for some reason she took to me and we enjoyed each other's company.  After tea and cake, Alice would often let me play on her piano.  I could only make a plinkerty-plonkerty racket, of course, and she began to give me lessons; she had been a piano teacher, among other things.  Unfortunately she passed away soon afterwards, but to my parent's amazement Alice bequeathed me one of her pianos in her Will.

I had that piano for around three years.  I don't know where the piano went to; I came home from school one day and it was suddenly gone.  I remember being furious but what could I do, being eight years old.  We were going to move house and there wouldn't be room for it at Lowton, so my mother said.  So that was that, with no further debate allowed.  We'd been raised to do as we were told instantly or receive  blows which would leave ears ringing, leave crimson welts behind. Discussion was never considered.  But let's not get into that.

Anyway, at the start of this year I posted about my goals for 2013, and one of these was to have more fun.  A friend of mine pointed out that I needed to quantify this statement, really.  Soooo, one of my ways of planning more fun is to start the doll collection that I've talked about for years but done little to achieve.  I do have a few dolls already, so I brought these out of storage and put them in a glass case in my "office" (corner of the dining room!) so I can enjoy them.  And then I saw this gorgeous 1950s doll - and so you all get to meet Alice!

Posted by Adele Cosgrove-Bray at 4:36 pm