Snow and a Cross-stitch Peacock 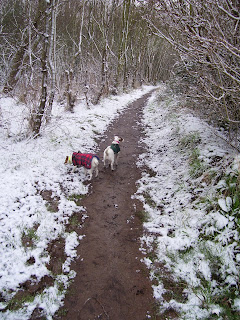 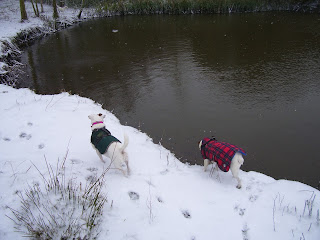 Gilroy Nature Park, West Kirby, Wirral.﻿
﻿
It's snowing.  It's winter, so that's not so unusual.  From the media fuss, however, a person might imagine that the wintry weather had come unexpectedly despite this being January, and despite January often being the coldest month of any year here in England.  It's not that cold really - the pond in Gilroy Nature Park isn't even frozen at the edges.
I've made a start on a new cross-stitch, using 24-count black Aida.  It's ages since I've done any cross-stitch!  I got thoroughly fed up with counted cross-stitch as it's tedious constantly having to count the coded squares on the chart then count the holes on the Aida to know where to stitch.  Fiddle to that!  Never again.  This time I wanted to create a cross-stitch peacock, so I bought some Aida off eBay, took a few photos of peacocks from Google Images, then used a loose running stitch in a contrasting colour to mark out where the peacock lay on the Aida.  Then I started stitching - simple!  So far I've done the head (without the crown/crest) and part of the neck, and I've found this method is much quicker and far more creative than counted cross-stitch, and consequently more fun.
Posted by Adele Cosgrove-Bray at 12:59 pm

I see since I last visited your blog there are new pets. We adopted a mini pincher to be company for our mini doxie Tiny. He hates her. But she keeps trying to woo him. Eric posts on my Facebook often. I truly like him. Glad to see you got some snow. I love snow. We had one glorious snow. I am eager for spring and flowers again. I noticed most of the blogs I follow have quit writing except for yours.

Hello, and thanks for dropping by again. We've only one new dog, an 18-month Jack Russell Terrier called Poppi, who we adopted. The snow's all gone now, thank goodness, and we have snowdrops in bloom and the daffs are 6" high - so spring's on it's way. :)

I hope all is well with you and yours.