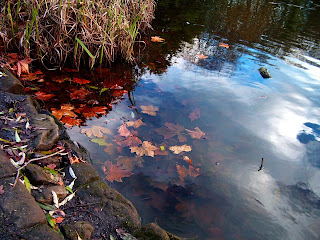 The photo above was taken this week at the edge of the pond in Ashton Park.  I passed an elderly man who was holding a chunky camera with a foot-long lens.  Mine sits in my pocket, a modest Kodak which weighs next to nothing.  My old Pentax SLR was much more flexible from a creative view-point, and the lenses were excellent.  Meanwhile, I'm happy tinkering with this little digi, which is ok for static shots.

For snapping anything moving it's hopeless as the shutter works more slowly than the button - so you have to press the button and attempt to move the camera in time with whatever you're trying to photograph.  Mostly the resulting image is blurred or partially missing.  For example, last winter I tried to photograph our dogs playing in the snow.  They were having a fine old time, chasing each other around.  Unfortunately, due to the shutter/button delay, mostly all I caught was images of snow and various dogs' blurry backsides as they hurtled out of frame.

I've seen quite a number of lovely second-hand SLRs for sale at £5 or thereabouts.  A few years ago, Richard and I would have pounced on them!  But technology has moved on rapidly, of course, and as our "darkroom" is languishing in storage boxes anyway it seem pointless to add to the collection of SLRs which we already own.

Of course, one advantage of my digi over my old SLR is that I can also use it as a video camera.  If you scoot over to YouTube, some of my little films can be viewed there.  I won't pretend that they're great!  They're unashamedly amateur, DIY and hotchpotch...but ok for a bit of fun.

Richard wanted to be a professional photographer.  In his twenties he studied photography at City & Guilds level, and it was through working as photographers for Conservation Practice that we both met.  I'd undertaken some formal photographic training as part of my B/Tec in Art & Design, but it was during those long photoshoots around Liverpool in all weathers, or experimenting with photographic effects in the darkroom, that we got to know each other well.  This was nearly two years before we started dating.  By then, he'd decided to continue his family trade of tattooing, which he had been learning since the age of eleven, and he'd set up the city centre studio where he still is to this day.  But tattooing was not what he wanted to do; it's what he chose to do as the most practical option at that time.  He still does photography, of course, when he gets the chance.  It's one of those interests which stays with a person.

Our two styles of photography are quite distinct.  While our work these-days tends to be on the natural world, he goes for close-up details and even macro shots, whereas I'm more interested in broader, more atmospheric shots.  The above photo of the pond edge is as close-up as things get, with my work.
Posted by Adele Cosgrove-Bray at 12:17 pm

Email ThisBlogThis!Share to TwitterShare to FacebookShare to Pinterest
Labels: photography