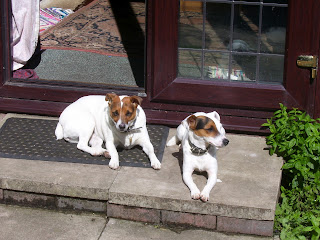 Emily and Poppi enjoying the sunshine.
I've begun a major clear-out of household junk.  So far I've filled two bin-bags with shredded MS and gone-curly ring-clip files, ancient plant pots and "useful" kitchen equipment which  hasn't been used since the last Ice Age.  And this is only the start of the de-junking process.  The wheelie bin is already piled high, so there's no point in me doing more until that's been emptied.
The dogs supervised, of course, until they got thoroughly bored with listening to me singing along with Suede, and  wandered off to snooze on cushions.  Actually, this afternoon I thought Poppi had somehow got out of the garden as I couldn't see her anywhere.  The garden's escape-proof but you should never underestimate the resourcefulness of a Jack Russell.  Anyway, I found her curled up fast asleep on Richard's pillow, which she'd dragged half-way across the bed to a sunny spot.
Poppi is settling into the household really well.  She's such a sweet-natured dog, and no trouble at all.  She's painfully thin, though otherwise in good health, so now she's being fed properly - yes, her stomach is as eager as any other puppy's - then she should steadily improve.  As I type this, she's by my feet playing with a toy meercat.
Emily has taken to her readily, and has shown no sign of canine jealousy.  They've already begun playing together, playing chase with toys.  And they both enjoy daily walks, of course.  Richard says it was Emily who chose Poppi, as whenever he'd pass the house where she lived Emily and Poppi would sniff noses and wag tails, and Poppi would run down the garden path to meet Emily each time he passed.  That's how he got chatting with her previous owners, who said they could no longer look after her and would Richard be interested in having another dog.  Richard wanted to say yes immediately but thought he'd ask me first.  The second he told me about Poppi I said yes, even before I'd seen her.
Well, she's been here for six days, and she's a little treasure.  She's a part of our family now. 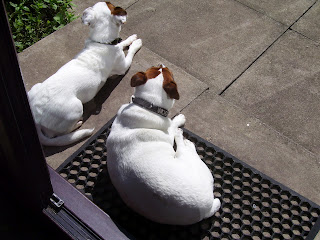 Posted by Adele Cosgrove-Bray at 4:52 pm