Moths, Bats and Nearly a Dog! 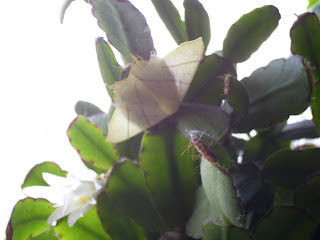 A yellow swallow-tailed moth rests on a leaf in our bathroom. 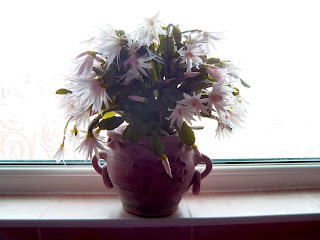 The same plant - a variety of Rhipsalidopsis - in flower.
One of the things I love about living here on the Wirral is the variety of wildlife.  As I type this, there's a gorgeous yellow swallow-tailed moth sitting on one of the plants upstairs, as seen in the photo above.  The photo doesn't quite catch the moth's colour which is a distinct pale lemon-yellow, whereas the photo has bleached out much of the colour, making it look more of a chalky white.  Its wing span measures 2".
The garden outside attracts a large variety of moths - which is as well, as the bats have to eat something!  It might look romantic to us, as we enjoy an evening cuppa while sitting on the patio (when it's not raining!!), but there are life-and-death battles unfolding overhead.  The moths are trying to eat pollen to live, and the bats are trying to eat moths so they can live.  Such is nature, red in fang and proboscis.
Tomorrow, Buster is scheduled to arrive.  He should have come here from the animal sanctuary over a week ago but he had a sore derriere following his snip at the vets.  The people at the sanctuary felt this was enough for the poor little chap to cope with, without moving house as well...!

Posted by Adele Cosgrove-Bray at 9:31 am