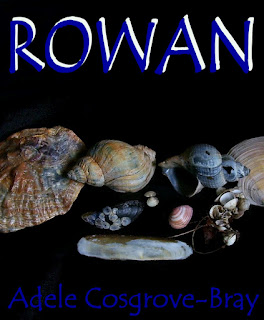 Hot off the software, here's the proposed front cover for Rowan, which should be available as an ebook by the end of this month.  All the shells used are from either West Kirby beach or Red Rocks, Hoyake, which is where Rowan would have collected them.  Some of the poetry which Rowan writes features shells.  Anyway, let me know what you think of the cover.

Other than creating this, today I had an appointment with my dentist - a lovely man whose kindness has helped me overcome my childhood horror of dentists, which was caused by the horror of a dentist I was made to attend as a child.   Why my sister Hazel and I were continually sent to this uncaring, even cruel person I do not know.  His syringes had a similar thickness to knitting needles, and the drill he used was a huge thing on a folding arm which made your entire head vibrate.  As soon as I reached my teens I rebelled and went elsewhere, and Hazel swiftly did likewise.

Posted by Adele Cosgrove-Bray at 5:11 pm