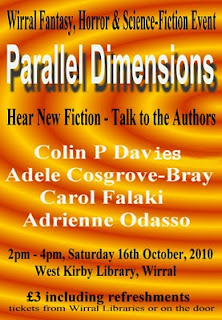 Parallel Dimensions returns for its second year to bring together some of the UK's strongest emerging writers of the Fantasy, Horror and Science-Fiction genres.

Colin has seen over forty of his short stories published in anthologies and magazines. He is the author of The Bookmole, a novel whose sequel is due out soon. His illustrations have also appeared in international genre magazines.

Adele Cosgrove-Bray's short stories appear in various anthologies published by Hadley Rille Books and Dark Moon Press. Her non-fiction writings have been featured in Prediction Magazine and Your Future. She is currently writing her forth in a series of Dark Fantasy novels set in Wirral and Liverpool.

draws on her professional experience as a midwife. She has also enjoyed publishing success with her poetry.

Almost fifty of Adrienne Odasso's poems have been published in a wide variety of magazines, chapbooks and anthologies. Her six published short stories have also aded to her growing reputation as a talented writer.

This event is part of the third annual Wirral Bookfest. Tickets are already on sale from all Wirral Libraries. Entry costs just £3 and includes refreshments.


More About the Authors...