In reply to those who asked, last weekend’s Circle of Hands gathering was postponed at the last minute. It has been rescheduled for October 29th at the usual time.

Tonight, I’ll be running a writers’ workshop on “The Craft of Constructive Criticism”, and so now I’m wondering how many people will turn up. All my notes and the exercises we’ll be doing are ready. If you’re in Wirral, join us at West Kirby Library at 7.30pm.

Rain all day here. Richard went out to buy his revolting rice milk, which he uses as a dairy substitute. I think it tastes like watery wallpaper glue—and the one which has been flavoured with hazelnut is vile beyond vile….

Meanwhile, I’ve been pouring over maps of Knoydart and gazing longingly at photos of its forests, craggy glens and mountains. I found the perfect cottage—took one look at it and thought, “Wow! That’s Bethany Rose’s cottage!” Photo prompts are useful to me; so are little sketches.

Do you ever get the feeling you’re wasting your breath?

Someone was complaining to me (again) about how much their teeth hurt, especially now that one filling has fallen out and half of another tooth has snapped off. A quick glance inside this person’s mouth gave me a glimpse of several other badly decaying teeth. But will this person go to a dentist, even though I’ve encouraged them (numerous times) to do so, even though I’ve pointed this person in the direction of a free dental hospital? I’ve even offered to go with them for moral support.

No. Instead, they live with bad teeth, constant pain and the threat of abscesses. They moan and do nothing.

“Part of being an adult,” I said, “means taking responsibility for yourself. You can’t behave like an ostrich, stick your head in the sand and hope problems will go away.” 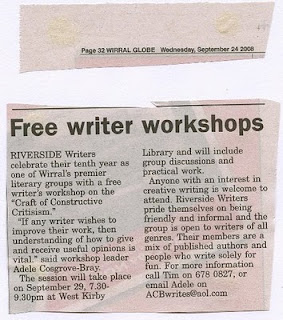 Yay! We made it into the "what's on" section of The Wirral Globe. If you feel like coming along to Monday's workshop then feel free to do so.
Tomorrow, from 1pm, you will be able to hear Tim Hulme, Peter Hurd and me live on 7 Waves Radio. We're on Cath Bore's Lunchtime Forum again. Listen via the station's website on http://7waves.co.uk/live-across-the-wirral/ or, if you live on Wirral, then tune to 92.1FM.

(And Emily is sitting on the windowsill squeaking because she's bored...)
Posted by Adele Cosgrove-Bray at 12:52 pm