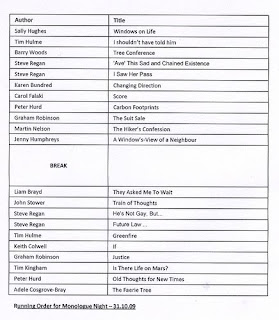 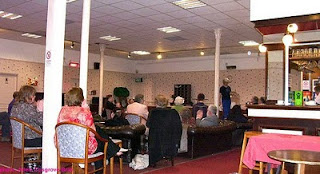 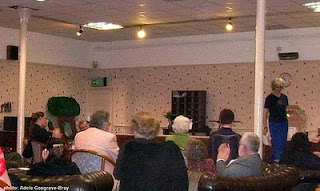 October 31st saw an evening or short monologues by various writers from Wirral performed by members of the Carlton Players. The event was organised by Jenny Humphreys. Three other members of Riverside Writers took part, apart from myself: Tim Hulme, Carol Falaki and Peter Hurd.

My contribution was one of my short pieces involving the Caldy fae, The Faerie Tree, which is partly autobiographical. This was performed by Angela Keeler, who has been acting for seventeen years.

My photos are poor, my only excuse being the tricky lighting conditions which my digi isn't clever enough to cope with - sharp spotlights from the ceiling and bar area, and deep shadows. I had to push the highlight option in PhotoImpression 4 to extremes in order to be able to see much of the stage area. With my old and trusty Pentax SLR it would have been a doddle.
Posted by Adele Cosgrove-Bray at 10:45 am