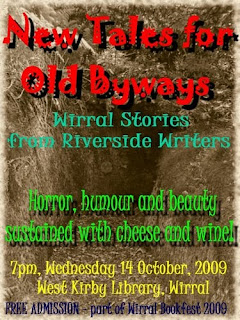 Am I ready for tonight? I organised it, so I should hope so…

Yesterday, I was chatting to Julie Mann, one of the librarians at West Kirby Library, and we remarked how the initial planning for New Tales for Old Byways had begun at a meeting a year ago. That was when the Wirral Bookfest had been scheduled for April, before the threatened library closures set everything back months. Julie will be taking photos tonight, just as she did for last year’s Words from Wordsmiths event.

Wirral TV will be filming tonight’s event. This was confirmed only yesterday. It should be an interesting experience to have a film crew moving around.

I’ll be reading Seth’s Basement, which introduces one man’s strange hobby; and also Food, which is one of my series about the Caldy Hill fae. But the program is very diverse, being a group effort.

Hope to see you there!
Posted by Adele Cosgrove-Bray at 10:58 am